William "Billy" Starkey is a minor but pivotal character in the first book of The Stand. In the 1994 adaptation he is played by Ed Harris. J.K. Simmons portrays the character in The Stand (2020 Miniseries)

Gentlemen, a regrettable incident has occurred. And when a regrettable incident occurs which involves any branch of the United States Military, we don't question the roots of that incident but rather how the branches may best be pruned.The service is mother and father to us. And if you find your mother raped or your father beaten and robbed, before you call the police or begin an investigation, you cover their nakedness. Because you love them.Starkey had never heard anyone talk so well before or since. — unnamed member of the Joint Chiefs of Staff, March 16, 1968

William Starkey is a West Point-educated US Army general, whose service record reaches back to the Vietnam War (the quote refers to the military's reaction upon receiving report of the My Lai Massacre). At the start of the story in either the book or the miniseries, Starkey is the commanding officer in charge of Project Blue, the biological warfare project which developed the superflu virus.

General William Starkey is introduced in "The Stand" when Project Blue's secret facility in California experiences a containment breach; the virus kills all within except a security guard, who goes AWOL and manages to flee the compound with his family. Through him the virus begins to infect civilians and quickly reaches epidemic proportions.

To protect the classified nature of Project Blue, and also forestall a domestic and international panic, Starkey takes several drastic measures. Throughout the crisis he issues many morally-questionable but arguably necessary orders through a close friend and fellow officer, Major Len Creighton, trying to stall the spread of the virus with sheer ruthlessness.

One of Starkey's early moves is to order the press to remain silent about the superflu. When it becomes clear that the media are not willing to cooperate with strict military-ordered censorship voluntarily, Starkey issues a coded order to deal with the problem. The command "Troy" authorizes military suppression of the media, up to and including the use of deadly force. This brutal act ultimately fails, as both independent journalists and newspapers alike soon realise what is happening. Tens of thousands of newspapers are printed by the LA Times alone, telling the truth of the rapidly-deteriorating situation and revealing the federal government's lies about the superflu.

By the time soldiers are able to stop the printings and execute those responsible, it no longer matters. Word has gotten out, and the public knows something very wrong is going on. College students rebel in mass numbers at a university in Kentucky and at Kent State in Ohio, where a bloody massacre occurs when the unarmed students are confronted by heavily-armed soldiers and refuse to back down. A popular radio talk show host, Ray Flowers, is killed on the air by soldiers when he refuses to stop taking uncensored calls from listeners. These incidents and many others cause increasing protests and rebellion among the general public, and mutiny and desertion become a swiftly-escalating problem for the US Armed Forces.

When situation escalates to a national crisis and rapidly spirals out of control, Starkey is relieved of command by the president (whom Starkey refers to as a "dirty alderman" and a "grinning, gladhanding sack of shit".) He prepares to hand over command of US Armed Forces containment operations to Len Creighton, commenting that he does not envy Creighton's position, but still wishes his friend good luck.

Before stepping down Starkey orders that the command "Rome falls" be issued to covert U.S. operatives overseas. All of these operatives have been issued vials of the superflu, but are unaware of the vials' true contents. On command, they will release the disease on other continents, in order to obscure its true point of origin. This act completely destroys any chance of containing the superflu, ensures the near-extinction of all mankind, and leaves Starkey solely responsible for billions of deaths.

Instead of being appalled or angry at the failure of all of his orders and decisions to stop or even slow the spread of the superflu, Starkey is on the contrary grim and fatalistic, having known that if the superflu ever escaped the Army base that created it, the situation would very likely be hopeless from the start no matter what anyone did. Towards the end, Starkey muses on several lines from the W. B. Yeats poem "The Second Coming": that things fall apart; the center cannot hold. And, grimly foreshadowing the imminent rise of Randall Flagg:

At the facility in the California desert which housed Project Blue, Starkey places his sidearm in his mouth and commits suicide. In the TV minisieries, he pins a piece of paper to his full dress uniform, with one word written on it: "GUILTY". 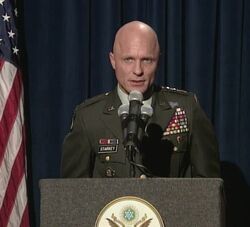 General Starkey denies the existence of the superflu. 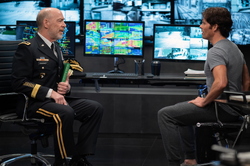 General Starkey prepares to meet his end.
Add a photo to this gallery
Retrieved from "https://stephenking.fandom.com/wiki/William_Starkey?oldid=81821"
Community content is available under CC-BY-SA unless otherwise noted.