"Bill: Look that's where G-G-Georgie disappeared. There's the Ironworks and the Black Spot. Everywhere it happened is... is all connected by the sewers. And they all meet up at...
Ben: The Well House.
Stan: It's in the house on Neibolt Street.
Richie: You mean that creepy-ass house where all the junkies and hobos like to sleep?
Beverly: I hate that place. It always feels like it's watching me.
Eddie: That's where I saw IT. There I saw a clown.
Bill: Th-Th-Th That's where IT lives.
Stan: I can't imagine anything ever wanting to live there."

―The Losers' Club discussing IT's location

The Well House, also known as the Haunted House, is the house on Neibolt Street in IT and the 2017 movie adaptation. It's an abandoned house where IT lives. All the major incidents are connected to this house by the sewers. Most of the Losers' Club hate this house. According to Richie, it’s a “creepy-ass house” where junkies and hobos like to sleep. In the film adaption of 2017 adaption, it is identified as being built on the location of Derry's old well house, hence the name and it is where the first Derry settlers taken by It disappeared as well as the entrance to It's lair.

In the novel, it acts as the location of the Losers Club's first real fight with It in 1958. After the Losers succeed in wounding It, It flees the house. Unlike in the later film adaption, it is mainly an abandoned house It uses as a lair.

In It: Chapter One, the house on Neibolt St. plays a significant role in the movie, in many ways greater than that of the original novel. Along with being an old abandoned house, it is built on the location of Derry's former well house. Back when Derry was first formed, the first 91 settlers disappeared without a trace. The only clue that was ever found was a trail of bloody clothes leading to the well house. In modern times, it is where all of the town's sewers connect to and thus it is the one place in town that connects everything together. While not It's lair per se, it acts as the primary entrance through the old well in the basement. The Losers first real fight with It takes place here, ending with the Losers breaking up for awhile due to how badly it went. The Losers later return to the house to enter the sewers and confront It. In the basement, the Losers are attacked by Henry Bowers who is shoved down the well to his apparent death by Mike Hanlon.

In It: Chapter Two, its revealed that Henry survived his fall down the well and is arrested for murdering his father after getting washed out of the sewers. In 2016, Bill Denbrough returns to the house after witnessing It brutally murder a young boy in order to confront the creature. Joined by his friends, Bill reenters the house where It tries to stop the Losers from reaching It's true lair, manifesting as Stan Uris' decapitated head. The Losers manage to fight off It and enter the sewers once again through the old well.

After It is killed, It's lair collapses. The Losers escape through the old house just before it collapses along with the rest of It's lair. 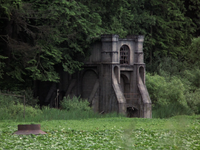 The Well House when Derry was formed
Add a photo to this gallery
Retrieved from "https://stephenking.fandom.com/wiki/Well_House?oldid=73584"
Community content is available under CC-BY-SA unless otherwise noted.