Vera Donovan was a wealthy woman living on Little Tall Island in Maine. She was the employer of Dolores Claiborne.

Vera was displayed as a mean woman who was widowed from her husband. She hired maid Dolores Claiborne and often added to the stress of Dolores' troubled home life. One day, Dolores broke down crying and in front of Vera. Vera asked what was wrong and Dolores confided in her how her husband, Joe St. George, was beating her and molesting her daughter. Vera then implied she had killed her husband (who was cheating on her) by saying that "husbands have accidents" and accidents are sometimes a blessing. On the day of a solar eclipse, before Dolores murders Joe, she calls Dolores by her maiden name implying she knew Dolores would kill him that day. As time passes, Dolores and Vera become lifelong friends with a love-hate relationship. At the end of her lifetime, the senile and aging Vera runs down the staircase in an attempt to escape from the delusions that had been haunting her for years. Vera is badly injured and tells Dolores, which had so far been trying to save her, that she wishes to die. Vera calls out to Dolores, asking her to kill her so she won't suffer. As Dolores goes to get a rolling pin to oblige, Vera dies.

Vera's two children, Donald and Helga, died in a car accident in October of 1961 almost exactly a year after their father's car accident. Her whole life she has told Dolores a made up story of how they were still alive. Dolores is told the truth when she tells Greenbush that Donald and Helga should inherit Vera's 30-million-dollar fortune rather than her. 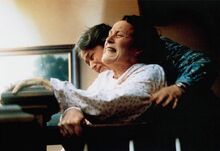 Add a photo to this gallery
Retrieved from "https://stephenking.fandom.com/wiki/Vera_Donovan?oldid=72083"
Community content is available under CC-BY-SA unless otherwise noted.