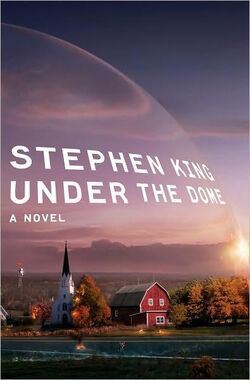 Under the Dome is the 59th book published by Stephen King; it was his 47th novel, and the 40th under his own name. The book was released by Scribner on  November 10th  2009.

In September of 2008, King mentioned in a "self-interview" that the manuscript for Dome is "over 1500 pages;" he later mentioned the novel in his Entertainment Weekly column on 23 January 2009 noting that "it's over a thousand pages long," and that the final novel runs 1,072 pages.

On 15 September 2009, King's official site posted a 61-page facsimile excerpt from King's original novel The Cannibals, consisting of the first four chapters of the original typescript. A further sixty pages were posted on 4 October. The excerpts served also to document how long ago King had developed the idea of the Dome as a narrative device.

"Several Internet writers have speculated on a perceived similarity between Under the Dome and The Simpsons Movie, where, [...] Springfield is isolated inside a large glass dome [...]. I can’t speak personally to this, because I have never seen the movie, and the similarity came as a complete surprise to me...although I know, from personal experience, that the similarity will turn out to be casual. For the doubters, this excerpt [from The Cannibals] should demonstrate that I was thinking dome and isolation long before Homer, Marge, and their amusing brood came on the scene."

In turn, The Simpsons Movie was mentioned in the third episode of the Under the Dome television series as being watched by the teenagers at Joe McAlister's house, while Joe's friend Benny Drake claims that the filmmakers "totally saw the Dome coming."

Shortly before noon on Saturday October 21 of an unspecified year after 2012 evident by mention of a faded bumper sticker on the back of a vehicle for Barack Obama's successful 2012 re-election campaign in the small Maine, town of Chester's Mill is abruptly and gruesomely separated from the outside world by an invisible, semipermeable barrier of unknown origin. The immediate appearance of the barrier causes a number of injuries and fatalities, and traps former Army "Captain" Dale "Barbie" Barbara—who is trying to leave Chester's Mill—inside the town.

Police Chief Howard "Duke" Perkins is soon killed when his pacemaker explodes after getting too close to the barrier. This removes the last significant opposition to James "Big Jim" Rennie, used car salesman and the town's Second Selectman. Big Jim exerts significant influence within Chester's Mill, and seizes the opportunity to use the barrier as part of a power play to take over the town.

Big Jim appoints one of his cronies, the incompetent Peter Randolph as the new Police Chief. He also begins expanding the ranks of the Chester's Mill Police with questionable candidates, including his son, Junior Rennie, and his friends. Junior has frequent migraines caused by an as-yet undiscovered brain tumor which has also begun affecting his mental state; unbeknownst to Big Jim, Junior was in the process of beating and strangling a girl to death when the barrier appeared, and has killed another girl by the time Rennie places him on the police force.

Elsewhere in Chester's Mill, Julia Shumway, the editor of the local newspaper, is phoned by Colonel James O. Cox, who has her carry a message to Barbie to contact him. When he does, Cox requests that Barbie act as the government's liaison in an effort to bring down the Dome, as it has come to be known. Because of Barbie's talents as a former bomb factory hunter, Cox gives him the task of locating the source, which is believed to be inside the Dome. Cox is also able to foresee the small town political ramifications of such a situation. By virtue of a Presidential order, Barbie is reinstated in the US Military and promoted to full Colonel. Barbie is also presented with a decree granting him authority over the township. However, smalltown politics being what they are, this action is not well received by Big Jim and his misguided band of renegade police officers.

As Big Jim covertly encourages and orchestrates unease and panic among the town to build up his grab for power, Barbie, Julia and a number of other townspeople attempt to stop things from spiraling out of control. After crossing Rennie's path on several occasions, Barbie is framed and arrested for 4 murders. He is accused of killing Reverend Lester Coggins, who laundered money for Rennie's large-scale methamphetamine operation, and Duke's widow Brenda Perkins, who were both murdered by Big Jim. While Barbie is in jail other residents track the source of the Dome to an abandoned farm, and the device is strongly indicated to be extraterrestrial in origin. The restrictions issued by Rennie become more severe and the police force grows more abusive, galvanizing the town and eventually leading some residents to break Barbie out of jail, killing Junior seconds before he can murder Barbie.

The semi-organized resistance flees to the abandoned farm, where multiple people touch the strange object and experience visions. They not only conclude that the device was put in place by extraterrestrial "leatherheads" (so named for their appearance), but that specifically they are juveniles who have set up the Dome as a cruel form of entertainment, a sort of ant farm used to capture sentient beings and allow their captors to view everything that happens inside.

On an organized "Visitors Day"—when people outside the Dome can meet at its edge with people within—Big Jim sends Randolph and a detachment of police to take back control of his former meth operation from Phil "Chef" Bushey, who is stopping Rennie from covering up the operation as well as hoarding the more than four-hundred tanks of propane stored there. Many are killed in the ensuing gunfight and mortally-wounded Chef detonates a plastic explosive device he has placed in the meth production facility, before dying. The ensuing explosion, combined with the propane and meth-making chemicals, unleashes a toxic firestorm.

More than a thousand of the town's residents are quickly incinerated on national television, leaving alive only the twenty-six survivors at the abandoned barn, an orphaned farm boy hiding in a potato cellar, and Big Jim and his informal aide-de-camp, Carter Thibodeau, in the town's fallout shelter. Big Jim and Thibodeau eventually turn on each other; Big Jim stabs and disembowels Thibodeau, only to die several hours later when hallucinations of the dead send him fleeing into the now-toxic environment outside. The survivors at the barn begin to slowly asphyxiate, despite efforts by the Army to force clean air through the walls of the Dome.

Barbie and Julia go to the control device to beg their captors to release them. Julia is able to make contact with a single female leatherhead, no longer accompanied by her friends and thus not caught up in their peer pressure. After repeatedly expressing that they are real sentient beings with real "little lives", and by sharing a painful childhood incident with the adolescent alien, Julia convinces the leatherhead to have pity on them. The Dome raises up slowly and vanishes, allowing the toxic air to dissipate and finally freeing the town of Chester's Mill.

On 11 November 2009, King mentioned during a book signing the potential for an HBO miniseries based on the novel. The series was eventually picked up by CBS, and began airing on June 24, 2013. 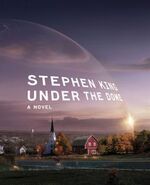