Tracy Campbell was a character in the movie The Rage: Carrie 2. She was portrayed by Charlotte Ayanna.

She attended Bates High School and was the equivalance of the late Chris Hargensen. She was also the ex-girlfriend of football player named Jesse Ryan, who broke with her because of her lack of empathy towards the death of Lisa Parker. When Jesse becomes interested in Rachel Lang, she becomes jealous and plots the humiliation of Rachel with all the others in an effort to win Jesse back.

On the night of The Black Party, Jesse and Tracy arrive at Mark Bing's house to discover the house in flames and their friends were found dead due to Rachel's murderous rampage. When Rachel notices Tracy, she is killed and slaughtered, when Rachel collapses the ceiling above her and causes it to additionally burn. 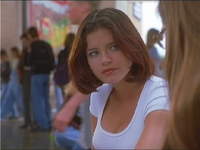 Add a photo to this gallery
Retrieved from "https://stephenking.fandom.com/wiki/Tracy_Campbell?oldid=72459"
Community content is available under CC-BY-SA unless otherwise noted.