William Katt (1976 movie)
Kandyse McClure (2002 TV movie)
Ansel Elgort (2013 movie)
Thomas Everett Ross, best known as Tommy Ross is the boyfriend of Sue Snell and a student at Ewen High School in Chamberlain, Maine. He took Carrie White to the Prom in place of his girlfriend, at Sue's request. Prior to this, Tommy is a member of Ewen's track, football and baseball teams and is one of the most popular boys at the school. Sue also believed that she was pregnant with his baby.

Also, when Sue proposed for him to take Carrie White to the prom, both were making out in his car. Later, during prom night, pig's blood was dumped on Carrie, the bucket hit him in the head, cracking his skull like a mirror and killing him later.

Tommy Ross is portrayed by William Katt in Carrie (1976).

Like his novel counterpart, Tommy was very athletic and seemingly, very poetic. His English teacher, Mr. Fromm, read a poem supposedly written by Tommy and offered the class an opportunity to give criticisms. However, when the teacher began putting too much into Carrie White's calling the poem "beautiful," Tommy drew fire away from her in his own way when Mr. Fromm criticized her for that. Sue Snell (Amy Irving) approached Tommy one day at the running track and proposed that he should take Carrie to their Senior Prom. Tommy was against this idea at first, but later relented while he and Sue were doing some studying one evening. Tommy approached Carrie (Sissy Spacek) in the library the following day and asked if she would like to accompany him to the Prom next Friday. Poor Carrie could not believe what she just heard someone actually asked her to the Prom. But, it was very difficult for her to trust anybody at her school, after having spent countless years in the midst of cruel peers. After a refreshing pep talk of sorts with Miss Collins (Betty Buckley) and Tommy's further pressure of the issue, Carrie finally decided to go with Tommy. Sadly, neither they nor Sue knew that this particular Prom Night would be the most traumatic night of their young lives. Prom Night arrives Tommy arrived at Carrie's house in his car and both proceeded to the Bates High School gymnasium, where the Prom took place. At first, Carrie was having second thoughts about Tommy and her being together, saying it may have been a bad idea. Tommy assured Carrie that everyone at the prom was a "good crowd", and that she ought not be so nervous. With that, Tommy walked to the other side of his vehicle and opened the door for his lovely date. The Prom was off to a big start when Carrie and Tommy entered. They met Frieda Jason and George Dawson at the main doors and Frieda escorted Carrie to hers and George's table. Immediately during this exchange, Norma Watson (P.J. Soles), Chris Hargensen's best friend, started laughing hysterically. Some of the other prom goers just simply stared at Carrie, who became nervous again. Later in the evening, just after Miss Collins finished talking to Carrie, Tommy rejoined her and eventually asked Carrie, if she wanted to dance. She said, she did not know how and once Tommy and her made it to the middle of the dance floor, began to turn back. But Tommy guided the shy Carrie along, gently… slowly. He kept her going even after she stepped on his foot. But, after a minute or so, the two stared at each other and Tommy leaned over to Carrie and kissed her. Carrie later asked Tommy about why she was at the prom with him in the first place. He told her as he had when he came to her house to ask about the prom again that she liked his "poem". But someone else wrote it, Tommy admits and that surprised Carrie. However, Tommy said that as long as Carrie and he were together, that was enough. Carrie and Tommy eventually found out that they were on the ballot for Prom King and Queen. Carrie asked if Tommy wanted out, but he wasn't having. He even suggested that they vote for themselves. Carrie was totally against the idea, but Tommy managed to convince her that, if only for Prom Night, she should let go of false modesty. Carrie only smiled and grabbed the pencil out of Tommy's hand to mark their names on the ballot. Of course, she and Tommy won the nominations and were called to the stage. Their procession was a "slow motion" event, which gave way to Sue's arrival at the prom, her view of Carrie and Tommy together, the discovery of the rope attached to a wayward bucket and its source, and Sue's eventual capture and removal by Miss Collins. Tommy saw Sue and thought she was there only to make trouble, but when he caught sight of pig's blood spilling all over Carrie from above, his thoughts turned from Sue back to Carrie. He looked up and saw the bucket swinging from a rope attached to a rafter. Tommy was enraged at what happened to Carrie, but that same bucket he saw swinging from the rafter crashed down on his head, breaking his skull like a mirror in the process and killing him while Carrie witnessed it. Later, he was pronounced dead in the Black Prom tragedy.

Tommy Ross was portrayed by Tobias Mehler in Carrie (2002).

They also met in a similar fashion to the classic movie, but they went to the prom in a limousine instead of Tommy's car. They were both together with Helen Shyres and her boyfriend during the prom night until the election.

In this remake, Tommy was murdered by Christine and Billy with the complicity of others in their obsession to humiliate Carrie White with their prank and get away with it.

Tommy Ross was portrayed by Ansel Elgort in Carrie (2013).

His characteristics were similar to the novel. He seemed to be very popular. Like the other films he asked Carrie to the prom at Sue's request. He also made love with Sue Snell, causing her to become pregnant. However, during the prom, he was presumed dead in the Ewen Prom Night tragedy when a bucket hit him hard on the head and he was seen lying on the stage with aimless, vacant eyes.

Unlike the previous versions, nobody came to his aid except for Carrie. Realizing he was dead for real, she mourned by his side before destroying the prom in anger.

Like in the 2002 TV-remake, Tommy was murdered by Christine and Billy in cold blood, with the complicity of others, but unlike the other movies, it was his murder that ignited Carrie's insanity and murderous rampage, and not the laughter of the spectators, who, in this movie, laughed previously to this event.

After Tommy's death at the hands of Christine Hargensen and Billy Nolan, Sue learned that she was pregnant with his child, and decided to raise his child without him.

In a deleted scene Tommy and Carrie kiss. 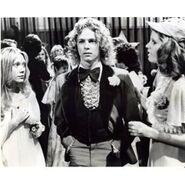 Tommy's name on the Prom King and Queen ballot 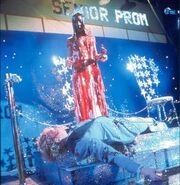 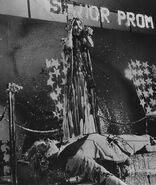 Retrieved from "https://stephenking.fandom.com/wiki/Tommy_Ross?oldid=82187"
Community content is available under CC-BY-SA unless otherwise noted.