The Stand by Stephen King

CBS All Access
The Stand is an American dark fantasy web television miniseries, based on The Stand by Stephen King. The series premiered on December 17, 2020. There are nine episodes total in the series.

The Stand is described as "King's apocalyptic vision of a world decimated by plague and embroiled in an elemental struggle between good and evil. The fate of mankind rests on the frail shoulders of the 108-year-old Mother Abagail and a handful of survivors. Their worst nightmares are embodied by a man with a lethal smile and unspeakable powers: Randall Flagg, the nefarious 'Dark Man.'

Initially, it was hoped that "The Stand" would be made into a theatrical release. For over a decade the project was in "development hell" while various directors (Ben Affleck, Paul Greengrass and David Yates) were attached to the project, only to drop out and move on. Eventually, Josh Boone ("The Fault in Our Stars") took on the project and stayed on when it moved from the big screen back to television. CBS All Access took over and made it into a ten hour mini-series with nine episodes directed by Boone. The production began filming in Vancouver, British Columbia on September 19, 2019 and wrapped on March 11, 2020. Production was finished before the COVID-19 pandemic shut it down.[1] [2] [3]

In June 2019, James Marsden, Amber Heard, Whoopi Goldberg, Greg Kinnear, Odessa Young and Henry Zaga were all in consideration for the roles of Stu Redman, Nadine Cross, Mother Abagail, Glen Bateman, Frannie Goldsmith and Nick Andros, respectively. On August 1 2019, it was announced at the TCA Summer Presentation by CBS All Access the formal casting of Marsden, Heard, Young, and Zaga were all cast in the series. According to news reports, Stephen King has written an entirely different ending to the final chapter of the series that is also different than the book as well as a coda. In addition, the last episodes will be written by King and his son Owen. On September 11, 2019 (how apropo) it was announced that Alexander Skarsgård was cast as Randall Flagg.Also confirmed cast members include Goldberg, Jovan Adepo, Owen Teague, Brad William Henke, and Daniel Sunjata for the roles of Mother Abagail, Larry Underwood, Harold Lauder, Tom Cullen, and Cobb respectively. On August 19, 2020, Mick Garris, the director of the 1994 miniseries adaptation, confirmed that he would have a non-speaking cameo in the new series. On December 3, 2020, showrunner Ben Cavell revealed during the Television Critics Association virtual panel presentation for the series that Stephen King would have a cameo.In August 2020 it was announced that Fiona Dourif and Irene Bedard had been cast as gender-swapped versions of The Rat Man and Ralph Brentner, respectively. 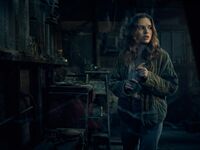 Harold (Owen Teague) and his famous sign for other survivors.Note the month is September and the destination is Atlanta and not Stovington.

Watching the lights go out for the last time

General Starkey and Stu Redman have a face to face about the state of the world.

Larry Underwood (Jovan Adepo) and Rita Blakemoor (Heather Graham) on their journey out of the dead city of New York.

Harold on the Boulder clean-up crew

Frannie and Harold share a quiet moment of contemplation.

Stu makes his way out of the government facility - post pandemic 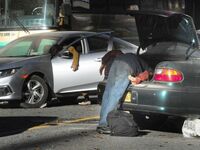 The aftermath of the Captain Trips Pandemic 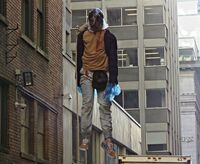 A looter meets a bad end.

Larry and Rita disagree over the route to take

Whoopi Goldberg as Mother Abigail in "The Stand" (2020)

A victim of Captain Trips; a visual representation of "tubeneck". 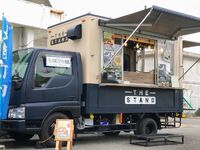 Catering truck on the set of "The Stand" 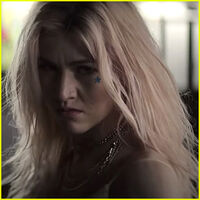 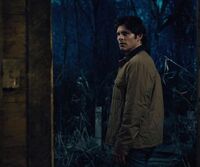 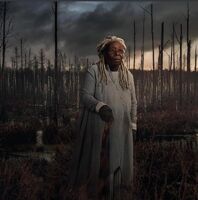 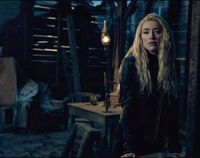 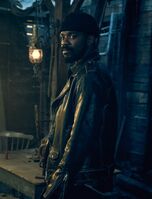 Glen Bateman and Kojak on the road. 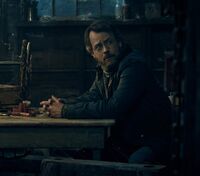 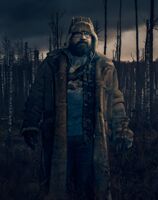 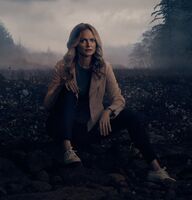 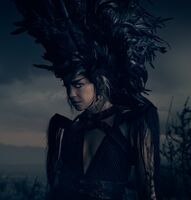 Fiona Dourif as Rat Woman. Possibly portraying the character after having settled in Flagg's Las Vegas. 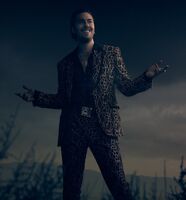 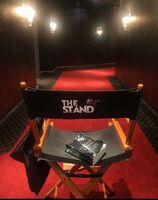 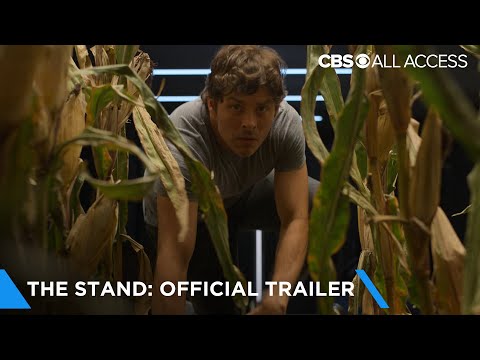 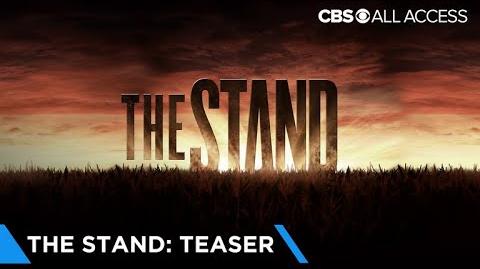 [4] Cast and crew on reboot were creeped out by real-world similarities to COVID-19.

[5]'The Stand' Boss on Changes to Stephen King's Story - Variety