The Dead Zone is the eighth book published by Stephen King; it is his seventh novel, and the fifth novel under his own name. The book was the first of King's novels published by Viking Press in August 30, 1979.

In 1953, a young boy named Johnny Smith suffers an accident while ice-skating; while recovering he mumbles "Don't jump it no more" to an adult on the scene. A few months later the adult is seriously injured while jump starting a car battery. Two years later in an unconnected incident in Iowa, a young door to door Bible salesman named Greg Stillson, suffering emotional issues and dreaming of greatness, vindictively kicks an aggressive dog to death.

The story skips to 1970. Johnny is now a high school teacher. After eerily winning repeatedly at the wheel of fortune with his girlfriend Sarah Bracknell, Johnny is involved in an accident on his way home and is in a coma for 5 years. On waking, Johnny finds that he has suffered neural injury, but on touching people and objects he is able to tell them things they did not know - in this way he knows a nurse's son would have successful surgery, states that his doctor's mother, long believed dead, is living in Carmel, California, tells Sarah that her lost wedding ring was in her suitcase pocket, and later recounts the story behind a St. Christopher medallion owned by a skeptical reporter. Johnny shrugs off local media reports of his supposed psychic talents and accepts an offer to resume teaching, but begins to suffer from severe headaches. A reporter for a national tabloid maliciously prints a story denouncing his clairvoyance as phony, but this brings Johnny relief and the hope he can resume a normal life - a hope broken when he is contacted by George Bannerman desperate to solve a series of murders, including that of a child. His extra sense provides enough detail to identify the killer, Frank Dodd, who commits suicide and leaves a confession.

Stillson, now a successful businessman and elected mayor of Ridgeway, N.H., still suffers from his emotional problems. Asked to "straighten out" a friend's teenaged nephew for wearing an obscene t-shirt, he sets the shirt on fire and terrorizes the youth with a broken bottle, threatening to kill him if he tells anyone. Some time later he decides to run for the House of Representatives, blackmailing a local businessman into raising funds for him.

Johnny's offer to return to his teaching job is rescinded due to his being "too controversial to be effective as a teacher". He moves to New Hampshire and takes a job as tutor for a wealthy young man named Chuck. He also takes up an interest in politics, and becomes concerned when he watches a rally for Stillson. Later on, Johnny meets presidential candidate Jimmy Carter and shakes his hand. Having another clairvoyant incident, he tells Carter that he is going to be president. Johnny then makes a hobby out of meeting politicians to see their futures. Johnny attends a rally for Stillson and on touching his hand has a horrific vision of an older Stillson as President causing a worldwide nuclear conflict.

Johnny's health starts to worsen. He contemplates how he might prevent Stillson's presidency and compares the matter to the question whether one would kill Adolf Hitler in 1932 if time travel were possible. Eventually, he concludes that the only certain way to avoid the terrible future he has seen is assassination, but procrastinates, rationalizing this by doubt in the vision he has seen, abhorrence of murder, and belief there is no urgent need to act at the moment. As Johnny continues to contemplate the matter, he has another vision and warns Chuck not to go to his high school graduation party because the facility is going to be struck by lightning and burn down. Chuck's father agrees to host an alternative party for Chuck and other students, but their party at home is interrupted by news of a lighting strike and many deaths at the original venue. Johnny also learns that the FBI agent investigating Stillson has been murdered with a car bomb.

Johnny learns that his headaches and blackouts are due to a brain tumor and that without treatment he only has a few months left to live (although we do not learn this until the epilogue). Johnny takes the fire at the party as a warning, that he knew the fire would happen but had not taken it seriously enough and as a result people had died. Realizing that he won't live much longer whatever he decides, Johnny refuses surgery and buys a rifle to shoot Stillson at the next rally.

At the rally, Stillson begins his speech and Johnny attempts to shoot Stillson, but misses and is wounded by Stillson's bodyguards. Before he can fire again Stillson grabs a young child and holds him up as a human shield. Johnny pauses, unable to shoot, and is shot twice by the bodyguards, falling off the balcony and fatally injuring himself. A young photographer successfully photographs Stillson using the child as a shield, a picture that it is implied destroys Stillson's political future when published. Dying, Johnny touches Stillson a final time but feels only dwindling impressions and knows that the terrible future Stillson would bring around as President has been prevented.

A Senate committee (chaired by real-life Maine Senator William Cohen) investigates Johnny's attempt to assassinate Stillson. Sarah has a brief moment of psychic contact with Johnny's spirit at his grave and drives away comforted. 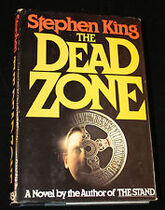 Hodder Paperback edition of The Dead Zone published in 2011 by Hodder and Stoughton
Русский
Community content is available under CC-BY-SA unless otherwise noted.
Advertisement