A submachine gun (SMG) is a magazine-fed, automatic firearm carbine designed to fire pistol cartridges. The term "submachine gun" was coined by John T. Thompson, the inventor of the Thompson submachine gun.

The submachine gun was developed during World War I (1914–1918). At its peak during World War II (1939–1945), millions of SMGs were made. After the war, new SMG designs appeared frequently. However, by the 1980s, SMG usage decreased.Today, submachine guns have been largely replaced by assault rifles, which have a greater effective range and are capable of penetrating the helmuts and body armor used by modern infantry soldiers.

However the submachine gun is still in use by police and militaries around the world and ,for now, it still seems to have a place in modern arsenals. 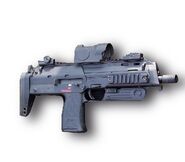 Swedish manufactured Model 45 Carl Gustav smg. Used by American Special Forces in Vietnam where it was popularly known as "The Swedish K".

German WWII smg - MP 40. Often referred to as a "Schmeisser"