Gary Sinise (1994)
James Marsden (2020)
Stuart "Stu" Richard Redman is one of the central characters of The Stand. In the 2020 miniseries, his character is portrayed by James Marsden.

He was an employee at the calculator plant of Arnette, Texas. He was one of the handful of survivors of the superflu known as "Captain Trips".

A quiet man from the fictitious town of Arnette, Texas. He is there at the beginning of the plague and survives not only the Flu, but the government's attempt to eliminate him. Later he emerges as one of the leaders of the Boulder Free Zone. He proves to be a natural leader and resilient under great stress.

Stu and Frannie Goldsmith become lovers, and a couple, during their journey across the United States to Boulder, Colorado.

Stu was born and raised in the (fictional) town of Arnette, Texas. His father, a dentist, died when Stu was seven.  Stu went to work in a meatpacking plant at 14, lying about his age because his family desperately needed money. Stu had two brothers, one who died as a child.

Stu often felt a bit looked down on and overshadowed by his brother's success. It is mentioned in the novel that "Stu had been in the war," most likely the Vietnam War given the year the first edition of the book was published, but no further mention of his military service is ever made in any version of the story.

Stu is shown to have had a slight wild streak as a young man, often sneaking across the border to Mexico with his friends to visit brothels. He did mature later on, though, and married a woman named Norma. Sadly, Norma developed cancer (implied to be uterine cancer) and died after only about 18 months of marriage.

Four years after Norma's death, Stu is working at a calculator factory, and earning extra income working at the gas station of his friend Bill "Hap" Hapscomb. It is there, while Stu is sitting with Hap and several other friends, that Charles Campion (a military guard at the base where Captain Trips was developed) arrives in Arnette and crashes his car into Hap's pumps. Stu's action of quickly turning off the pumps averts an explosion; however, Campion and his wife and daughter are already dying of the superflu. All of the men at the gas station are exposed, as is the ambulance crew that comes to retrieve Campion.

Arnette becomes ground zero of the superflu epidemic and is placed under quarantine. With the rest of the populace Stu is taken to Atlanta, Georgia and the Centers for Disease Control and Prevention via Braintree, Texas and later to Stovington, Vermont (in the miniseries he is taken directly to Vermont).

Stu soon realizes that he is the last survivor of Arnette, and that he's seen too much for the Army to let him live.  He escapes the Stovington facility by killing the man sent to assassinate him, and heads eastward, initially with no clear goal but finding the Atlantic Ocean. He is haunted by dreams of both Mother Abagail in Hemingford Home, Nebraska and Randall Flagg in Las Vegas, Nevada.

In Woodsville, New Hampshire Stu encounters fellow plague survivor Glen Bateman, and a bit later, Fran Goldsmith and Harold Lauder. Infatuated with Fran, Harold feels instantly threatened by Stu, who promises not to steal her; but within a short time, Stu and Fran do become a couple. Harold becomes angry and begins plotting revenge.

Plague-survivors throughout the country are experiencing prophetic dreams of both Flagg and Abagail. Prompted by the dreams, Stu and his growing party decides to join Abagail's group, which has begun gathering in Boulder, Colorado.

In the Boulder Free Zone, Stu is elected first to the ad hoc, and then the permanent version of the Boulder Free Zone Committee, later becoming its chairman and chief law officer. Harold puts on an air of friendless toward Stu and Fran, but secretly still intends to kill both of them. Stu is nearly shot by Harold one night, only spared when Harold freezes and can't pull the trigger.

Acting on a tip by Leo Rockway that Harold is up to no good, Fran and fellow committee member Larry Underwood break into Harold's house; they locate his diary and bring it to Stu, who reads it cover to cover.  Harold's writing lays bare many of his motivations and intentions, and processing it all gives Stu "a damn headache."

Stu deduces that Harold and Nadine Cross intend to defect to Flagg's territory, and are "planning to do something so they'll be made to feel welcome" upon arrival in the west. But none of them are able to tease from its contents the fact that Harold has constructed a dynamite bomb, which eventually blows up the home shared by Nick Andros and Ralph Brentner, killing seven people and injuring a number of others.

Stu and the other surviving men of the committee — Larry, Ralph, and Glen — are told by Mother Abagail to go west to Las Vegas and confront Flagg. She tells them that "one will fall by the way", but she does not know which one. Ultimately, it is Stu; in the Utah badlands he falls down a washed-out embankment and breaks his leg.

Reluctantly, but at Stu's insistence, the other three men leave him by a broken-down car in the washout and continue west. Kojak remains with him: hunting small game, fetching firewood, comforting and guarding him. Despite the dog's assistance Stu begins to suffer from exposure and falls gravely ill.

Stu witnesses the mushroom-cloud from the nuclear blast which destroys Las Vegas, putting a stop to the Zone's threat from Randall Flagg. Shortly afterward Stu is found and rescued by Tom Cullen, by which time Stu is suffering from pneumonia in both lungs. They make it to shelter in Green River, Utah, and take refuge in a hunting lodge; there Tom treats Stu's pneumonia with advice from Nick's ghost, who helps him find antibiotics and tells him how to nurse Stu back to health.

After another significant delay snowed in at Grand Junction, Colorado, the two men make their way back to Boulder, arriving a few days after Fran gives birth to her son (fathered by ex-boyfriend Jesse Rider; a few weeks before Captain Trips is released from Project Blue).

That spring Fran expresses homesickness and a desire to return to New England. Stu concurs that things are becoming uneasy in the Free Zone; the increasing size of the population has led to the resurrection of old social ills like politics, an armed police force, and people feeling the need to lock their doors at night. He and Fran take Peter and head back east — with Fran again pregnant, this time carrying Stu's child.

Stu wonders whether humanity has learned anything from the plague and whether they can impress on their children the importance of not messing with "dangerous toys" (nuclear weapons, biological weapons etc.).

In the 1994 miniseries, Redman was played by Gary Sinise.

In the The Stand (2020 Miniseries), Stu Redman is portrayed by James Marsden.

Turn off the pumps Hap!

Stu makes his way out of the governmental facility 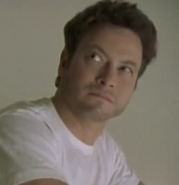 Retrieved from "https://stephenking.fandom.com/wiki/Stuart_Redman?oldid=81951"
Community content is available under CC-BY-SA unless otherwise noted.