Selena St. George is the daughter of Dolores Claiborne and Joe St. George. She left Little Tall Island and didn't return, until her mother was accused of the murder of Vera Donovan (in the movie), in the book she returned to Little Tall Island the Christmas following Vera's death for the first time in twenty years.

In the novel she played a very small and unimportant role. However, Dolores did love her unconditionally.

As a teenager, as Joe began to become impotent after Dolores hit him while threatening his life. He then began setting his sights on his own daughter, whose body is beginning to mature. Joe begins spending more time with Selena, and at first Dolores thinks nothing of it. But when Selena becomes withdrawn and quiet, she begins to suspect something is wrong. Dolores was able to stop Joe from having sex with her, but he has done everything he could "short of fucking her", but after a brief quarrel with Selena, finally gets her to, admit what is wrong. Selena admits that her father was molesting her for quite some time, and Dolores flies into a rage, later killing Joe and making his death look like an accident.

In the movie she is estranged from her mother because of the strange circumstances regarding her father´s death and is an alcoholic journalist living away from Maine. She is also a workaholic obsessed with her work and is living in New York. She returns, when an anonymous message told her, her mother had been labeled as a suspect in the murder of Vera Donovan.

She gets her out of the police station and brings her to their former home, whereupon she discovered, what really happened to her father, a mystery that was haunting her and why Dolores didn't murder Vera, who actually instructed Dolores to murder Joe. She uncovers repressed memories of her father's sexual molestation, is able to come to terms with her past, redeems herself and her mother, reconciles with her and makes sure she is no longer harassed regarding Vera Donovan´s death.

The two then live off of the wealthy Vera's insurance policy, who left all of her money to her only friend, Dolores, while Selena returns to New York to continue with her work as a journalist, in peace with herself. 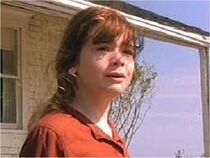