"Secret Window, Secret Garden" is a novella written by Stephen King that was included in his 1990 collection Four Past Midnight.

Mort Rainey is visited by a man who takes the name of John Shooter, with a manuscript which proves to be an almost exact copy of a story that Mort himself wrote and published some years earlier. John leaves Mort a copy of his manuscript.

Mort reads the manuscript and discovers the name of John's version is "Secret Window, Secret Garden" which is different from Mort's "Sowing Season." The other difference is the ending. Mort is revisited by Shooter another day. Mort discovers that he wrote his version before Shooter. Shooter demands proof, and gives Mort three days to get it. Over night, he kills Mort's cat with a screwdriver. He also burns down Amy's (his ex-wife) house. The house contained the magazine he needed for proof.

Mort orders a new copy of the magazine, he also gets a detective to help him out. He also trys to contact a man named Tom, who rode by Mort and Shooter in there last meeting. Shooter kills the detective and Tom both, and the evidence makes Mort look like the killer. He finally does get the magazine, but his story has been ripped out.

Mort returns home and realizes there is no John Shooter, it's just his imagination. He was the one who killed those people. Amy goes to Mort's home, and Mort attempts to kill her, but fails when he is shot and killed.

Later, Amy and Ted (the man she cheated with) discuss why Mort would do it, she insisted Mort was two people, that he created a character so vivid it became real. A letter is sent by John Shooter, stating he returned to Mississippi.

The story was adapted into a Secret Window in 2004.

The audiobook version of Secret Window, Secret Garden was read by James Woods, who played Dick Morrison in the Quitters, Inc. segment of the film Cat's Eye. 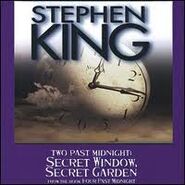