"Houses are alive. This is something we know, news from our nerve endings. If we're quiet, if we listen, we can hear houses breathe. Sometimes, in the depth of the dark night, you can even hear them groan. It's as if they were having bad dreams. A good house cradles and comforts...a bad one fills us with an instinctive unease. Bad houses hate our warmth and our human-ness, that blind hate for our humanity is what we say when we use the word haunted. Yet, isn't a house supposed to be a place of shelter, it’s the body we put over our bodies. As our bodies grow old, so do our houses. And as our bones may sicken, so do our houses sicken. But what of madness, when mad people live inside a house, does this madness creep into the rooms, the walls, the corridors, the very boards? Does this madness linger on after death? Don't we sometimes sense that madness reaching out to us, calling to us? Isn't that a large part of what we truly mean when we say a place is cursed, unquiet, spooked, festered up with ghost? We say haunted, but what we really mean is that the house has gone...insane!"

Rose Red was a very successful TV Mini-series scripted by Stephen King. The series was first broadcast in the United States on ABC in January 2002 with 18.5 million viewers, making it a ratings hit.

The fictional story centers around an enormous and legendary turn of the century edwardian mansion in the heart of Seattle named Rose Red, which was sworn to be haunted. Since it was first built it is believed to curse anyone who dared to live there; tragically killing males and responsible for females vanishing within its walls forever. Indeed, there was another world inside Rose Red, a second world, and there was much more to this grand house than meets the eye.

Due to the long history of mysterious deaths and disappearances from the past, the house was investigated in present day by parapsychologist Dr. Joyce Reardon and a team of truly gifted psychics. It was up to Joyce and her teammates to find out the deadly secrets of Rose Red and reveal the evil forces and dark energy inhabiting the property. Ultimately, the Team ended up learning that some mysteries are better left unsolved.

"Rose Red is a fairy tale for grown-ups. Not the Disney version of fairy tales, the other kind, where the story doesn't always have a happy ending. The kind in which the old woman in the forest just might put Hansel and Gretel in her pot or the shape under the covers greeting Little Red Riding Hood might gobble her up too. Think the brothers Grimm, who penned the story of Snow White and her sister, Rose Red, I subconsciously used as a name for my house from hell. I used all the metaphors, all of the symbols in this story – the evil spirit, the wicked witch, the doppelganger. All of the essential ingredients of Grimm are the basic material. If you think about it, Alice fell through a hole and ended up in Wonderland. Our characters once they find they’re trapped in Rose Red, they’re kind of in a weird and wicked wonderland where things don't make sense or respect the laws of logic. So our big bad wolf is actually a haunted house, a house with a mind of its own. A house that is bigger on the inside than on the outside. A house you could get lost in, and might never find your way back."-(Stephen King)

The Evil Inside Rose Red

Built by John Rimbauer as a wedding gift to his wife Ellen, the house was constructed on cursed land, in the middle of an ancient Indian burial site. Rose Red was thought to be "born bad", as even before it was fully completed, severel workmen on the area died during the long construction under strange and bizzare circumstances.

The house itself -- or rather, the force that possessed it and gave it a life of its own -- can only be described as a mysterious, evil parasite from the ancient Indian burial site that the establishment stood upon, living like a toxic organism inside Rose Red's structure. Over time, it became a powerful poltergeist that would eventually torment its inhabitants. For whatever reason, this nameless, supernatural force was extremely jealous of the warmth and emotions of humans. (It is not clarified if it is one spirit possessing the home or several spirits working together.) Seemingly out of spite, this force ate off the feelings of those who resided there and drained both the substantial life source and spiritual energy from its chosen victims. By consuming and absorbing their physical form, it keeps them in a state of "limbo" where they are cursed and doomed for eternity (or for as long as the house stands), to roam the halls and property of Rose Red as they become somewhat "trapped" within the unseen spirit realm that the house created deep within its walls. It uses these victims as mere pawns in all of its evil schemes, such as to lure more prey into its trap to become more powerful. Rose Red was unapologetic, even to its owners, having no regard or remorse. This proved to be true when the house took Ellen Rimbauer's beloved, six year old handicapped daughter named April Rimbauer who vanished within the mansion's kitchen one day while playing "tea-time", never to be physically seen again.

The force inside the house was very jealous, unpredictable and always hungry for souls. Interestingly, Rose Red was particularly fond of the ladies, and when no one was looking, it would swallow women up without a trace and their fate would result in them becoming "one with the house". But the men who entered or lived within Rose Red, yet who crossed it the wrong way or offended it, would simply die or be killed in the most horrific and unnatural ways. With each victim Rose Red killed or consumed, the more powerful and dangerous the house became. Rose Red would add wings, rooms, staircases, closets, corridors and even furniture to itself at will. This went on until the property was eventually abandoned shortly after Ellen Rimbauer disappeared in its halls in 1950 at the age of 70. After that it was had presumably fallen dormant, thus entering into a supposed "House-Coma".

If Some Houses Are Born Bad...This One Was Created In Hell...

In 2000, two years before the miniseries aired, the producers contracted with author Ridley Pearson to write a tie-in novel, The Diary of Ellen Rimbauer: My Life at Rose Red, under the pseudonym "Dr. Joyce Reardon" (one of the main characters of the miniseries). The novel presented itself as nonfiction, and claimed to be the actual diary of Ellen Rimbauer (wife of the builder of Rose Red). The work was originally intended to be an architectural book featuring photos and drawings of the fictional Rose Red house with the supernatural elements subtly woven into the text and photos, but Pearson (building on several references to a diary in King's script) wrote it as Ellen Rimbauer's diary instead. King came up with the idea of presenting the novel as real by having "Dr. Joyce Reardon" edit the "diary". King also inserted a reference into the book's forward that a "best-selling author had found the journal in Maine", so that fans would be misled into concluding that King had written the work. The ruse worked. Fans and the press speculated for some time that Stephen King or his wife Tabitha King had written the book until Pearson was revealed to be the novel's author. Intended to be a promotional item rather than a stand-alone work, its popularity spawned a 2003 prequel television miniseries to Rose Red, titled The Diary of Ellen Rimbauer. The novel tie-in idea was repeated on Stephen King's next project, the miniseries Kingdom Hospital. Richard Dooling, King's collaborator on Kingdom Hospital and writer of several episodes in the miniseries, published a fictional diary, The Journals of Eleanor Druse, in 2004. Eleanor Druse is a key character in Kingdom Hospital, much as Dr. Joyce Readon and Ellen Rimbauer are key characters in Rose Red.

A fictional Web site for "Beaumont University" (where Dr. Joyce Reardon, one of the main characters in the miniseries, taught parapsychology) was established. The site (still active as of May 2009) provided information on the history of Rose Red, background on the Rimbauer family, and limited information on various disappearances at the mansion. (http://www.beaumontuniversity.net)

In the weeks prior to Rose Red's premiere, the network released a mockumentary called Unlocking Rose Red: The Diary of Ellen Rimbauer with interviews conducted with 'real-life versions' of Joyce Reardon and other characters in the miniseries, seemingly arguing that the diary was a real document, while the upcoming miniseries was a dramatization of past events and events yet to come to pass ( as the 'real-life'Joyce Reardon's journey into the mansion was supposedly yet to happen at the time of the mockumentary's airing) created by Stephen King who was interviewed in the mockumentary as well.

The marketing campaign was considered highly successful. Many readers came to believe that The Diary of Ellen Rimbauer was real. The fake Beaumont University site was bombarded with emails from fans who were convinced that Dr. Joyce Reardon, Beaumont University, and Rose Red were real.

The miniseries originally aired on the ABC broadcast television network in the United States on three nights, from January 27-29, 2001. It was directed by Craig R. Baxley.

Links to other King novels

The character of Annie Wheaton is similar to another Stephen King character, Carrie White—the main character from Stephen King's first published novel, Carrie. As a young girl, Carrie White telekinetically dropped stones on her house, and Annie does the same thing at both the beginning and end of Rose Red.

The story has connections to at least four other King books as well. In both The Shining and Rose Red, young people with telepathic/empathic abilities are wanted by a haunted building for its own uses. Rose Red is referred to in King's Black House as one of the places where "slippage" occurs. King's short story "The Langoliers" (which appeared in his collection of four novellas, Four Past Midnight) features a mysterious British citizen named Nick H who is often assumed to be the character Nick Hardaway from Rose Red "Beaumont University," the college of at which Dr. Joyce Reardon is a faculty member, shares its name with Thad Beaumont, the protagonist from King's novel The Dark Half. The Beaumont name is common in King's works, as one of his favorite authors is speculative fiction author Charles Beaumont. 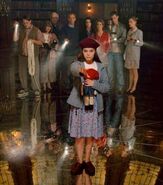 Add a photo to this gallery
Retrieved from "https://stephenking.fandom.com/wiki/Rose_Red?oldid=64882"
Community content is available under CC-BY-SA unless otherwise noted.