Stephen King Wiki
Register
Don't have an account?
Sign In
Advertisement
in: Stubs, Characters, The Outsider,
and 5 more

View source
watch 01:25
Jurassic World: Dominion Dominates Fandom Wikis - The Loop
Do you like this video?
Play Sound
Article Stub
This article is a stub, an article too short to provide more than rudimentary information about a subject. Please help the Stephen King Wiki by expanding it.

Ralph Anderson is a character from The Outsider and its 2020 adaptation. He is a police detective who investigates the gruesome murder and penetration of eleven-year-old boy Frankie Peterson.

Ralph Anderson is a Flint City PD detective who is married to Jeannie Anderson and has a son. He is the lead investigator in the gruesome murder of Frankie Peterson. He later arrests Terry Maitland when evidence strongly indicates that he is the murderer. However, Terry maintains his innocence.

Ralph becomes emotionally disturbed by the case, thinking of his own son, who is away at summer camp. Ralph later witnesses Terry get murdered in front of the courthouse by the victim's brother. This disturbs Ralph more, who soon has doubts when Terry doesn’t make a dying statement.

Through further investigation, Ralph comes to the conclusion that Terry was framed by a supernatural creature and that the creature is looking for its next victims. Assisted by Holly Gibney, Howie Gold, Alec Pelley and Yune Sablo, they travel to a remote area to help Claude Bolten, who they believe is the creature’s next victim. Ralph later witnesses Howie Gold and Alec Pelley get murdered by a psychotic Jack Hoskins. Ralph and Holly eventually murder the creature named the Outsider. Ralph returns to Flint City, apologizes to Marcy Maitland and clears Terry’s name from any wrongdoing he had been accused of.

In the 2020 TV adaptation, Ralph's character is similar to his novel counterpart apart from a few changes. His son Derek died of cancer, which made his actions towards the Frankie Peterson case personal. He arrests Terry and acts coldly towards him, even asking Terry if he touched Derek. As time goes on and the case becomes more strange,

Ralph becomes more stressed which is escalated by the media attention and his son's death. When Terry is shot dead outside the courthouse, he is put on leave for two weeks and sees a therapist, which he isn't too pleased about. He visits Glory Maitland, who tells him about their holiday to visit Terry's father. Maya Maitland then tells them that Terry got a cut after tripping over at the retirement home trying to grab a male nurse's hand, which intrigues Ralph and helps with the case. 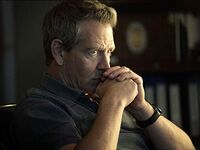