Rachel Lang or Rachel White is an anti-villain of The Rage: Carrie 2, a film produced in 1999 by Katt Shea, that was the sequel to Brian DePalma's 1976 film Carrie. Rachel is the paternal half-sister of Carrie White that she makes fun of, because Carrie's father Ralph White left her mother, Margaret, for another woman (Carrie mentioned this in the first movie). Rachel acts like Carrie and has the same abilities like her. She was portrayed by Emily Bergl, while Kayla Campbell played the younger Rachel.

(The following takes place at the beginning of The Rage) Like her half-sister Carrie White, (who was responsible for the Black Prom incident) whom she never met, Rachel apparently also possesses telekinetic capabilities, which became dormant only after her mother Barbara was taken away to an asylum (when Rachel was a little girl) while she was trying to protect her baby from the demons by painting her house red to keep away the evil spirits. The first example is when after walking away from a police officer, who was there and tried to help her by putting her in foster care, Rachel enters a door in her house, and it shuts itself behind her. Also, the windows open and shut and the lights turn on and off. After Rachel yells at the objects to cut it out, she runs in the closet with her dog, Walter. 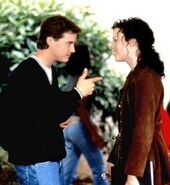 Add a photo to this gallery
Retrieved from "https://stephenking.fandom.com/wiki/Rachel_Lang?oldid=72318"
Community content is available under CC-BY-SA unless otherwise noted.