Stephen King Wiki
Register
Don't have an account?
Sign In
Advertisement
in: Characters, Unsourced quotes, IT,
and 11 more

View source
watch 01:04
Patrick Hockstetter
Do you like this video?
Play Sound

Patrick Hockstetter was a bully, member of Henry Bowers' gang, psychopath and a minor antagonist in the novel IT and its film adaptation. He is played by Owen Teague in the 2017 film version.

The Death of Patrick Hockstetter

Midway through the hot July summer of 1958, Patrick, Henry, Victor and Belch were playing down in the local junkyard. The four boys were lighting their own farts with Henry's lighter, enjoying watching the jet of fire shooting out of their bottoms. Not long after, Victor and Belch say that they can't stay any longer, saying that they had jobs to get to. Henry bitterly let them go, relieved when Patrick said that he could stay. Shortly after the others leave, the two remaining boys are bored with the lighter and Patrick says "Let me show you something," claiming that it "feels good." Henry obliged, allowing Patrick to give him a hand job, and even boldly offers Henry oral sex, to which Henry responding by punching Patrick in the face.

In the film, Patrick's death was different; his worst fear is zombies instead of leeches, which It uses to terrorize him in the form of several of the missing kids of Derry. He is chased into a dead end of the sewers and attacked by Pennywise before the film cuts away after venturing into Derry sewers in pursuit of victim Ben Hanscom. We do not explicitly see Hockstetter’s death as the camera cuts.

―Patrick to Stan Uris, before throwing his yarmulke. 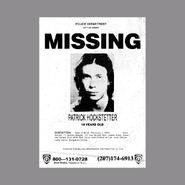 Patrick as a zombie in IT: Chapter Two. 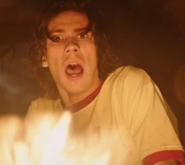