Ogunquit is a seaside resort town in York County, Maine. As of the 2010 United States census its population was 892. The summer resort's name means "beautiful place by the sea".

Ogunquit is part of the Portland, Maine metropolitan area.

Ogunquit, which means "beautiful place by the sea" in the Abenaki language, was first a village within Wells, Maine, which was settled in 1641. The first sawmill here was established in 1686, and shipbuilding developed along the tidal Ogunquit River. Local shipwrights built schooners, brigs and dories.

With a 3½-mile beach of pale sand and dunes forming a barrier peninsula, connected to the mainland in 1888 by bridge across the Ogunquit River, the village was discovered by artists, when the Ogunquit Art Colony was established, it was not unusual to see both artists and fishermen working around Perkins Cove. To accommodate summer crowds, several seaside hotels and inns were built. Ogunquit separated from Wells in 1980 and receives visitors from as far as Australia. Part of Stephen King's The Stand is set in Ogunquit. Ogunquit was named America's Best Coastal Small Town in USA Today's 10 Best Readers' Choice 2016 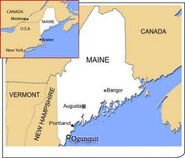 Add a photo to this gallery
Retrieved from "https://stephenking.fandom.com/wiki/Ogunquit,_Maine?oldid=76552"
Community content is available under CC-BY-SA unless otherwise noted.