Stephen King Wiki
Register
Don't have an account?
Sign In
Advertisement
in: Characters, The Stand, Females,
and 2 more

Nadine Cross was an orphan adopted at the age of four and a half months. Her adoptive parents and their biological son were killed in a car accident when she was six, whereupon she went to live with their relatives.  At no point did Nadine ever feel wanted by either family that adopted her:  her "parents" had always favored their natural son.  And her aunt and uncle, both middle-aged, resented being saddled with the responsibility of a child so late in life.

As Nadine reached sexual maturity, she made a couple of tentative attempts to have normal relationships with boys, but some strange, outside force had always thwarted those efforts. She came to believe that her virginity had some darkly sacred purpose: that she was intended for someone special, and that she was meant to wait for that person, like an "unbroken vessel".

Eventually Nadine went to college to pursue a teaching degree. One night her dorm-mates were playing with a Ouija board, and they pressured her to join in; however, unlike the playful prank messages that had resulted up until then, the planchette actually seemed to become possessed, spelling out terrifying occult messages directed straight at Nadine.

At the time of the superflu outbreak Nadine is thirty-seven and teaching grade-school at an exclusive facility in South Barnstead, New Hampshire. She is striking in appearance, with thick black hair shot through with strands of white. By this point in her life, through her dreams, she has also started to become familiar with her future husband — the entity others would soon come to know as Randall Flagg.  Anytime she dreams of him, or has any sort of sexually-charged experience, a little more of her hair turns white.

Searching for survivors after the plague in Epsom, New Hampshire, Nadine stumbles upon Leo Rockway: a twelve-year-old boy, dying on the lawn of his house from an infected animal-bite. The boy has reverted to a feral, violent state, and cannot speak or tell her his name, so she initially calls him "Joe". Nadine nurses him back to health, and Leo bonds with her; but it takes all of her experience and skill from working with children to keep his murderous impulses in check.

Nadine and "Joe" encounter Larry Underwood in Maine and begin to follow him. Nadine wants to travel with Larry, but does not trust "Joe", who has taken to wielding a large knife, to not hurt him. Finally they do make contact and as expected, relations between "Joe" and Larry are rocky at first. But quite by accident Larry discovers that "Joe" is a musical prodigy with a photographic memory — something not even Nadine had suspected — and music begins to humanize the boy again.

Larry is attracted to Nadine almost immediately, and the feeling is mutual. But Nadine rebuffs his advances, initially finding Larry to be shallow and self-centered. However the more he begins to bond with Leo, the more Leo seems to relax and even begins to speak in monosyllables, so Nadine begins to repent her harsh judgment.

By that time other plague survivors have joined their group and Larry has become lovers with Lucy Swann, although he is still obviously preoccupied with Nadine.

Upon arriving in the Boulder Free Zone Larry's group goes to greet Mother Abagail. Both Nadine and Abagail experience a moment of simultaneous clarity and terror: Abigail senses Flagg's presence within Nadine and briefly fears she will make an attempt on her life; Nadine, realizing Abigail can see right through her, fears that she will denounce her publicly. The tense moment is broken by Leo's intervention.

Feeling betrayed by Leo, Nadine senses Flagg's will pulling her to abandon the Free Zone and join him in Las Vegas.

One night, in final desperation, she goes to visit Larry and begs him to have sex with her. Her reasoning is that Flagg only wants her virginity; with that gone, the spell will be broken and she will be allowed to stay in Boulder and have a normal life. But there is no coherent way for her to explain this to Larry, who is merely disgusted at her suggestion that he betray his arrangement with Lucy (not to mention angry at himself for being aroused, as he is still attracted to her.)

Stung, Nadine resigns to being Flagg's pawn in Boulder, and later, his concubine in Las Vegas. She consults the dreaded Ouija board for further instructions, and is told to go seduce Harold Lauder — another disgruntled outsider, seething with resentment and ripe for exploitation. They proceed to indulge in every kind of kinky sex-play imaginable, except vaginal intercourse which is explicitly forbidden by Flagg. It is a frustrated and loveless arrangement, meant solely to manipulate Harold through sex, and the two end up despising one another.

On Flagg's orders Harold constructs a dynamite bomb which kills Nick Andros, Susan Stern, and a number of innocent bystanders. Nadine, having planted the device, is party to the murders. The two assassins immediately leave Boulder and head west; but at Nadine's request, Flagg arranges an accident where Harold's motorbike skids off into a ravine, leaving him to die of his injuries.

Nadine proceeds westward alone, towards her rendezvous with Flagg. She finally meets him in the desert, but when they are about to consummate their relationship, she has a belated epiphany that he is a supernatural being, a terrifying demon, not a man at all, and panics. Over her protestations Flagg overpowers and brutally rapes her, leaving her traumatized, catatonic — and pregnant.

Transported back to Las Vegas like a trophy, Nadine is installed in Flagg's quarters, still unresponsive and insane.

In her final moments however, Nadine is lucid, even prophetic: she informs Flagg of the four men from Boulder coming to "stamp you out like a disease" and "kill you like a chicken-stealing weasel." After she taunts him at length about how his control of the situation in Las Vegas is starting to unravel, Flagg loses his temper and hurls her from the penthouse balcony — realizing too late that she had purposefully goaded him into killing her. 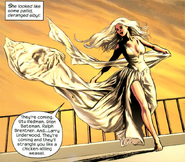