Mrs. Carmody ("Mother Carmody" as she called herself) is a deeply religious woman living in Bridgton, Maine. She is the main antagonist in the novella The Mist and its 2007 film adaptation. She owned an antiques shop, which sold mounted animals and glass objects. She got caught in a supermarket with many others when a mysterious mist covered the town.

After a strange mist surrounds the small town of Bridgton, Maine, a group of people that were shopping at the Food House supermarket remain trapped inside due to strange and dangerous creatures roaming the streets while residing within this mist. Mrs. Carmody is one of the trapped people, she is a middle-aged townswoman known for being very eccentric and religious.

She soon brainwashes many of the scared people inside the supermarket to the point that many start worshipping her as a prophet of God who had divine protection.

When Private Jesse, soldier reveals the truth about the mist, that it came from experiments held at a military base in the hills to open portals to other dimensions, only as a "window" to see what lies on the other side, Mother Carmody (Mrs. Carmody) in her anger said "Well' maybe your 'window' turned out to be a door, didn't it?". She blamed the the military and their scientists typically as haughty fools for going against God & his forbidden rules of old by distrupting the laws of nature and opening dooways that are better left unopened. She even ordered Private Jesse to to be sacrificed; the people took her orders to kill Jesse and throw the young man out to the beasts. When a little group of rational people that is against Mrs. Carmody, decide to leave the supermarket and go searching for help, she attempts to stop them and give them to the monsters as sacrifice. However the assistant manager Ollie Weeks killed her, causing her horrified group to come back to reality and realize that she was not an invincible prophet as she had preached. 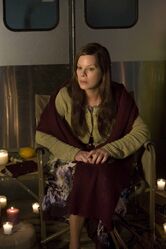 Mother Carmody
Add a photo to this gallery

Retrieved from "https://stephenking.fandom.com/wiki/Mrs._Carmody?oldid=74668"
Community content is available under CC-BY-SA unless otherwise noted.