Steve "Moose" Sadler is a boy who is part of Henry Bowers' gang and a minor character in IT. He is described as being a little retarded and is very slow, which makes him and Gard easy to manipulate which Henry most likely takes advantage of. His father works on the Hanlon family farm. Moose joins Henry in tormenting Mike Hanlon and also helped him break Eddie's arm in the park. However, he is shown to be more of a friend of Vic and Belch rather than Henry. He is also shown to be more of a follower or minion to Henry, rather than a friend. His name directly comes from the character from the Archie comics. It is somewhat implied that he dies in the summer of 1958 as the Losers later reminisce that all of Henry's friends are ultimately killed by It. He appears very briefly in the miniseries, only during the chasing of Mike Hanlon and the rock fight scene. In the miniseries, he appears as one of the greasers (the one with the Light brown suede jacket, light blue shirt.) 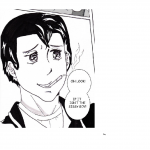