Start a Wiki
watch 01:15
Who is Mike Hanlon?
Do you like this video?

Mike is the most hated child in Derry by Henry Bowers[1], who developed this hatred by paralleling his father's hatred of Mike's father, Will. Henry terrorizes Mike when he gets a chance, and he killed Mike's dog, Mr. Chips, with rat poison.

While checking out the remains of the Kitchener Ironworks, Mike encounters It in the form of a giant bird. Mike hides in a smokestack and survives. IT reveals that Mike is afraid of this form from a very early memory of a crow pecking him when he was only 6 months old[2].

Mike was known to the Losers as he was the only black child in Derry, but, as he went to Neibolt Street Church School (on account of his mother being a devout Baptist) rather than Derry elementary, they didn't really know him personally. Accordingly, Mike is the last to join the Losers Club, bringing them to lucky number 7. While being chased by Henry and his friends Victor "Vic" Criss, Patrick Hockstetter, Reginald "Belch" Huggins, Moose Sadler and Peter Gordon, Mike is eventually cornered in the gravel pit. He tries to hold off Henry, but the bully throws an M-80 at him. The Losers Club comes to his rescue in what comes to be known as The Apocalyptic Rockfight. The Losers beat Henry's gang, and Mike becomes a member of their group.

Later, as the Losers work at building their clubhouse in the Barrens, Mike brings his father's photograph album to show the Losers that It shows up in many of the antique pictures, proving that It has been part of Derry for a long time.

When The Losers use their clubhouse to try an old Indian ritual to get a vision, it is Mike and Richie Tozier that see It landing on Earth from beyond space in a time long ago.

Mike recognizes mooseblowers when The Losers go to Neibolt Street with the silver slugs. This is a sign that It is also afraid of them.

Mike is the only one of the Losers to stay behind in Derry (and thus the only one to retain his memory of the events of 1958) and becomes the town librarian. He recalled the rest when the murders begin again in 1985. His father kept an album filled with photos that were important to Derry's history, including several of Pennywise the Clown. Through the knowledge he acquires of Derry and It, he becomes an amateur historian of the town. He is seriously wounded by Henry Bowers and nearly dies. He is not part of the final battle against IT because of his injuries. He is almost wounded by a man who was under the control of IT while in the hospital. He later recovers from his wounds, but, like the others, starts to lose his memory of the experience.

Mike works on his Grandfather Leroy's farm, as his parents died in a fire when he was child. This is the main source of fear that It uses against him. He is also troubled by the town dismissing it as drug induced death and the legacy this leaves him with. He also has issues with slaughtering sheep on the farm. Before the rockfight, he is chased by the Bowers Gang as he does his meat delivery. In the barrens before the Losers arrive, he sees Pennywise waving Eddie Corcoran's arm at him. As the Losers arrive to help they become fast friends as in the book. He tells the Losers how Leroy believes the town is cursed and due to a couple of close calls with Pennywise, decides against fighting It and separates from his friends for a bit, feeling he would survive as an outsider. However, when Beverly is kidnapped, he unites with his friends to rescue her and supplies the bolt gun for the final confrontation with It. Mike has a glorious moment when he defeats Henry Bowers in a short scuffle, knocking him down the well. At some other point in time, Mike talks about getting out of Derry after graduation and going to Florida.

Mike is the only Loser to remain in Derry, and lives in the library as he collects information on It through town history and trying to find ways to defeat it. He, at some point in his adult life, contacts a local Native American tribe who once fought it. Alone he goes through their ritual, replacing the Smoke Hole incident of the Losers childhood in the books. He sees not only It arriving, but the Natives trapping it through the Ritual of Chüd before being killed. When he calls back the Losers, and tells them he knows how to defeat It, he doesn't share with them the Native peoples outcome, as he fears their knowing will lead them to not believe and the Ritual to not work completely for them either. He is still attacked by Henry Bowers at the library, though after Eddie, and he is not seriously injured before Richie manages to kill Henry with an axe. This way he is able to go with the Losers for the confrontation in Its Lair under the city. After defeating It, as the Losers all remember each other, he keeps in contact. Having spent his entire life in Derry and no longer having a reason to remain, Mike decides to leave the town and start a new life elsewhere, presumably Florida like he desired as a child.

"Thanks, Guys. But, you shouldn't have done that. He'll be after you too now."

―Mike to the Losers Club

"My grandfather thinks this town is cursed. He says that all the bad things that happened in this town are because of one thing. An evil thing that feeds off the people of Derry."

―Mike to the Losers Club about Derry and IT

"Maybe. Or maybe IT knows what scares us most and that's what we see."

―Mike to the Losers' about IT knows about their fears

"You know the that burnt down house on Harris Avenue? I was inside when it burned down. Before I was rescued, my mom and dad were trapped in the next room over from me. They were pushing and pounding on the door trying to get to me. But it was too hot. When firemen finally found them, the skin on their hands melted down to the bone. We're all afraid of something." 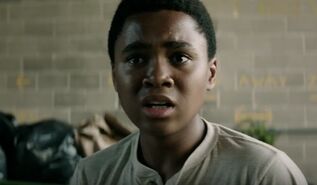 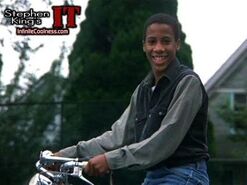 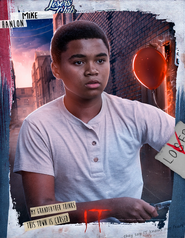 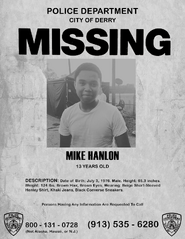 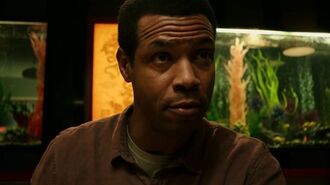 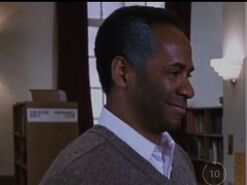 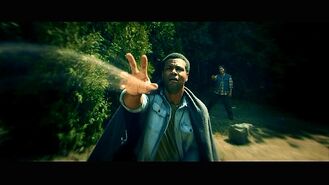 Retrieved from "https://stephenking.fandom.com/wiki/Mike_Hanlon?oldid=73645"
Community content is available under CC-BY-SA unless otherwise noted.