Stephen King Wiki
Register
Don't have an account?
Sign In
Advertisement
in: Characters, Residents of Maine, Living Characters,
and 8 more

Mike Anderson is played by Tim Daly in The Storm of the Century.

In the past Mike Anderson was the Constable of Little Tall Island in the 1999 TV miniseries Storm of the Century. He was married to Molly Anderson and has a son, Ralph Anderson. He also owned a shop there, which provided food for the island and had a friend, Alton Hatcher, who helped him in the shop and also helped him as a lieutenant in his additional job as a constable.

He tried to fight André Linoge, but he was too powerful while the town, out of fear because of his powers and his ability to kill, finally ceased to fight him. When Linoge finally demanded a child in exchange for going away, he also could not do anything about it for the same reasons. During the following lottery it was Mike's son who was picked and, against his wishes, he took him away without him being able to do something about it. In anger, disgust and in giref, Mike then divorces his wife, Molly Anderson for playing along with the rest of the villagers, and leaves the island. He moved to San Francisco and never returned.

Several years later, Mike sees his son and Linoge in San Francisco after coming out of a shop and calls out to his son. Because of that they stop to look back at him. After that his son bares his fangs at him and by doing that he threatens him not to com close to him. After that they simply turn and walk away without him being able to do anything about it again, like before, making him realise now in full that he has lost his son. This only strenghtens his resolve to never return to Little Tall Island.

The story is narrated by Mike. He says, "In this life we all have to pay a price and sometmes with all we have". 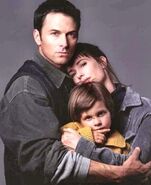 Mike with his family

Storm of the Century