Mark Bing is a character in the movie The Rage: Carrie 2. He was portrayed by Dylan Bruno.

Mark was a member of the football team and a friend of Eric Stark’s. He and his friends targeted Rachel Lang during the investigation of Rachel's best friend, Lisa Parker, who committed suicide due to the "sex-for-points" game by the football players, in which he was also involved in. Mark sets Rachel up in revenge for what she did regarding Lisa's death by helping in the investigation, triggering the Black Party.

During Rachel's murderous rampage at the Black Party, he realizes that Rachel is behind this and tries to save his life with the help of Eric and Monica by using harpoons he had in his house, but they cannot stop Rachel because she was extremely powerful, invincible, and dangerous. His two companions die, but he manages to stop Rachel by shooting her with a flare gun while she's distracted, causing her to fall into the swimming pool. He intends to finish her off with one of the harpoons, but Rachel surprises Mark, throwing him into the pool and later uses his harpoon to free herself, as the cover closes automatically under Rachel's telekinetic actions.

To Mark's ignorance as he wades in the pool, the cover knocks him on the back of the head, and, despite all of his desperate attempts to get out of the swimming pool, he drowns as his lapse and disadvantage takes their toll on his lack of endurance underwater. 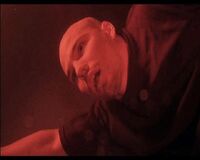 Add a photo to this gallery
Retrieved from "https://stephenking.fandom.com/wiki/Mark_Bing?oldid=74701"
Community content is available under CC-BY-SA unless otherwise noted.