Marcia Fadden is the girlfriend of Peter Gordon and a minor character in the horror novel, It. Along with Greta Bowie and Sally Mueller, she resided at West Broadway (one of Derry’s wealthiest districts). She was also a sixth-grade student at Derry Elementary School. Her name is often mispronounced as "Marci", and since, the character accepts it as a nickname. Marcia "Marci" Fadden.

Fadden and Gordon would often display strong resentment towards the Loser’s Club (particularly to Beverly Marsh and Richie Tozier). She is never seen again after the movie theater fiasco, although it was never assumed to be because of It.

In the novel, Fadden is described as being unattractive with heavy face acne. In the movie however, her facial appearance seems pretty decent: She has dirty blond hair that reaches down to her shoulders and has a rather cheeky face with a slightly fat chin. She wears a type of purple flower bow on her head, earrings, and a light turquoise sleeveless shirt.

Though absent in the miniseries, Marcia Fadden appears in the 2017 film adaptation (unlike Peter Gordon, who only made it as far as the miniseries) being played by Isabelle Nelisse. Here, she lacks the unattractive acne trait she was said to have in the novel and is shown to be classmates with Beverly Marsh and close friends with fellow West Broadway mean girls Greta Bowie and Sally Mueller. She, along with Sally, appears early yet briefly in the movie, where the two girls join Greta in bullying Beverly in the bathroom. During this time, Marcia runs water into a garbage bag and pours the wet garbage on her from the open roof of the bathroom stall she is in. She's not seen again after this scene, but it's not assumed to be because of It. 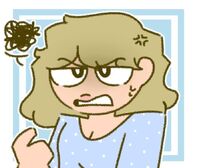