View source
watch 01:55
Cobra Kai Season 4 - The Loop
Do you like this video?
Play Sound

Lloyd Henreid is a supporting character and antagonist in the novel The Stand.

According to IMDb, Henreid is Stephen King's favorite character in both the book and the 1994 miniseries, where he is portrayed by Miguel Ferrer.

In the 2020 miniseries, Lloyd is portrayed by Nat Wolff.

Lloyd Henreid is a petty criminal of rather limited intelligence; he admits to having quit school in sixth grade. His age is not specified (the single passing reference to it does describe him as "young".) On the eve of the superflu outbreak, he is doing time for attempted rape at a Nevada work-farm, where he falls in with fellow inmate Andrew "Poke" Freeman.

Upon their release, Lloyd follows Poke's lead about a "big score" involving Gorgeous George, a Mafia delivery-boy who runs guns and drugs. The plan is to collude with George when a "fairly good haul" of his illegal merchandise is due; Poke and Henreid will bind George and rough him up for appearance's sake, and steal the goods after giving George a cut of the proceeds for his cooperation.They visit George's house, tie him up in his basement and give George a few visible injuries so as to convince George's suppliers that the theft wasn't planned.

The plan goes sideways when, after George's mouth is taped shut, Poke impulsively decides they should simply steal all of the goods, and "pokerize" (kill) George to guarantee his silence. He and Lloyd tape George's nose shut, leaving him no way to breathe; together they casually watch his violent death-throes as he suffocates.

Fueled by stolen drugs and guns, Lloyd and Poke spend several days driving aimlessly across Nevada, Arizona, and New Mexico, becoming interstate fugitives and the targets of a large manhunt. They commit multiple crimes, including robbery, auto theft, and several more murders. Finally, re-entering Arizona, they reach the town of Burrack in need of petty cash and gasoline for their latest vehicle, a large Lincoln Continental they took by force from a small family. They storm the Burrack gas station and general store intent on robbery. This time however, the cashier and a second customer are armed, and the robbery goes badly: two customers are killed, Poke is shot and Lloyd is apprehended by the state police when he tries to run.

Detained in the maximum security wing of the Phoenix municipal jail, Lloyd is informed by his court-appointed lawyer that a new federal law will likely expedite him to the electric chair if he pleads not guilty to the charges laid against him. Once Lloyd is properly terrified, the lawyer quickly begins coaching him in the false story they will tell the jury, which shifts the blame onto Poke and portrays Lloyd as more of a hostage than an accomplice.

The superflu descends upon Phoenix, killing all of the prison guards and most of the inmates. Lloyd is abandoned in his cell to starve to death. Eight days after the last prison meal is served, he has eaten all of his stored-up food. He kills a rat, saving it for later, telling himself he won't become that desperate but eventually devours it. He has begun to consider eating the leg of the nearest dead inmate, Trask.

Lloyd's plight turns worse when he hears another trapped inmate repeatedly yelling for his mother. Lloyd is able to work one of the legs of his cot loose and use it to kill both the rat he eats and to hook the pantleg of Trask and drag him close to his own cell. Lloyd loses several pounds in his forced starvation and runs out of water very quickly when it's turned off and the supply in his toilet dwindles.

When Randall Flagg arrives on the cellblock, Lloyd is immediately both hopeful and afraid, perceiving that he must be "the devil". Flagg seems empathetic to Lloyd's plight, but also makes light of his haggard condition and descent into cannibalism (in the uncut novel, Lloyd did indeed begin "lunching on filet of Trask") and even taunts him with descriptions of his lunch.

Flagg conjures a silver key and offers to let Lloyd out, but extracts from him a promise to be his right-hand man in the days ahead. After Lloyd gives his word, Flagg opens the cell and transforms the key into a black stone with a red flaw. For the rest of the novel, Lloyd wears the stone around his neck as a charm, which he thinks resembles an eye.

As Flagg's first post-plague recruit, Lloyd joins him at his base of operations in Las Vegas. True to his word, he becomes Flagg's lieutenant, helping to run the growing new community in Flagg's name.

Despite not being "very bright", a fact pointed out by Flagg and freely acknowledged by Lloyd, he perceives himself becoming more intelligent and competent. These newfound abilities he attributes to Flagg's mystical influences, but it is more likely that Lloyd's utter terror of failing Flagg has brought his mental acuity into sharp focus.

Lloyd feels he owes Flagg a life-debt for saving him from starvation in Phoenix. This belief helps him carry out some of Flagg's more unpleasant instructions, such as crucifying Las Vegas drug addicts like Heck Drogan.

Dayna Jurgens arrives in Las Vegas and Lloyd takes her as a lover, unaware that she is spying for the Boulder Free Zone. Flagg meets with her personally, revealing that he knows she's a spy, but remaining genial with her, even offering to let her go unharmed. When she refuses to reveal the name of the other spy sent by the Free Zone, she kills herself. Flagg unleashes his fury on her corpse and later coldly tells Lloyd  to take her body out and burn it.

In the wake of Mother Abagail's death, Flagg's control over Las Vegas begins to falter. Despite observing that he is "losing his stuff", Lloyd still sticks by Flagg with undying loyalty. He even refuses to join Whitney Horgan after being informed that he, Jenny Engstrom and Ace High intend to cut loose to South America before the situation gets any worse.

When three of the remaining Boulder Free Zone Committee members arrive in Las Vegas, Flagg has Lloyd shoot Glen Bateman for mocking him. Unnerved by the experience, Lloyd nonetheless reaffirms that he is truly and forever Flagg's creature.

On Flagg's orders, Larry Underwood and Ralph Brentner are scheduled for a public execution by dismemberment in downtown Las Vegas. The execution is interrupted when the Trashcan Man arrives, hauling a nuclear warhead out of the desert and into the assembled crowd.

Lloyd demands to know what Trash thinks he is doing, and orders him to take the bomb away. But the "hand of God" detonates the weapon, destroying Las Vegas and vaporizing everyone at ground zero — including Lloyd, who dies screaming "Oh shit, we're all fucked!"

"Small shit was the worst he would have done without Poke." 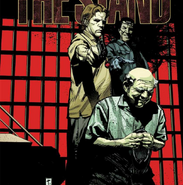 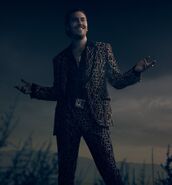