She is Rachel Lang's best friend in The Rage: Carrie 2 and the victim of an evil game perpetrated by the members of the Bates football team, where they sleep with as many girls as they can, rate them on a point system (which rates them according to their value, in their point of view), and then dump them.

Lisa was approached by Eric Stark, a wealthy and powerful member of the team and one of the evil players. After one night together, he dumped her the next day.

Lisa was unable to handle the fact that her relationship with Eric was only so he could deprive her of her virginity. That day, Lisa wrote a final entry in her diary explaining what happened, and headed up to the roof of the school, where she jumped off, landing on a parked car, committing suicide.

Many people saw her corpse after that, including Rachel. The pain regrading her death triggered Rachel's inherent telekinetic abilities and spurred Rachel to find out what happened to Lisa.

This caused tensions between her and the football team, who wanted to cover up their misdeeds. Finally it contributed to The Black Party. 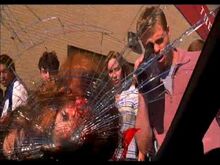 Lisa´s death
Add a photo to this gallery
Retrieved from "https://stephenking.fandom.com/wiki/Lisa_Parker?oldid=77855"
Community content is available under CC-BY-SA unless otherwise noted.