Julie lives in Pratt, Kansas and is the town's only survivor of the superflu epidemic. The novel is ambiguous about whether Julie is merely unstable due to being immature and self-absorbed, or whether she has some sort of legitimate mental pathology.

On the way to Hemingford Home, Nebraska Nick Andros and Tom Cullen stop to rest in Pratt, as Cullen has diarrhea from gorging on unripe apples. Nick enters a seemingly abandoned pharmacy to find Cullen some Pepto-Bismol.

Julie is inside, indiscriminately applying different kinds of perfume. Initially they are both glad to see a fellow plague-survivor; right away Julie pressures Nick for sex, and he lacks the will to fight off her advances.

Afterwards she gives her age to Nick as seventeen, along with a flood of superfluous details about her pre-plague life. These end up being so contradictory and confusing that it is hard to determine how much of her account is true, and how much is "lies or wish-fulfillment" — including whatever her true age might be.

After an hour of Julie's company Nick grows "annoyed, then bored with her" and "found himself wishing he hadn't found her in the first place." When he turns down a second demand for sex to go check on Tom, Julie reveals a cruel streak; she tells Tom that the bottle of Pepto-Bismol Nick has brought for him actually contains poison. Tom is hysterically upset, which Julie clearly finds very funny.

Fed up, Nick slaps her. Shocked and enraged, Julie loses control and tries to physically assault him, screaming; but he orders her away at gunpoint, telling her via handwritten note that "we don't need you."

Julie flees, but manages to reach their bikes first, slashing their tires and scattering their supplies. When they arrive to assess the damage she has reached the second floor of the Pratt Hotel and begins sniping them with her own firearm. Nick and Tom are forced to flee the town on foot.

Open to Randall Flagg's call, Julie later surfaces in Las Vegas and is set to manual labor at the Indian Springs airfield, which she hates. She eventually sees and recognizes Tom Cullen there, and reports his presence to Lloyd Henreid as a possible spy; however Cullen escapes before he can be apprehended.

Presumably Julie is in the crowd assembled to witness the public execution by dismemberment of Larry Underwood and Ralph Brentner. If so, she perishes in the destruction of Las Vegas by the nuclear warhead brought from the desert by the Trashcan Man, and detonated by the "hand of God". 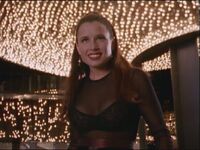 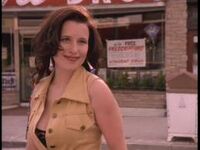 Katherine McNamara as Julie Lawry in The Stand (2020 Miniseries) 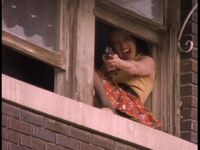