Dr. Joyce Reardon is a leading character in the TV miniseries Rose Red. She was a parapsychologist at Beamont University. She and a group of people with psychic abilities went to investigate the old Rimbauer mansion Rose Red in Seattle, Washington. After experiencing many paranormal events and discovering Rose Red is truly haunted, Joyce is consumed by the house and becomes trapped there. She was killed by the ghosts of Vic Kandinsky, Deanna Petrie, Patricia Waterman, Carl Miller, Kevin Bollinger, Sukeena, Nick Hardaway, and Pam Asbury.

Nancy Travis portrayed Joyce in the 2002 television miniseries. Sue Scott portrayed the "real life" version of the character in the mockumentary Unlocking Rose Red: The Diary of Ellen Rimbauer which was released by ABC to promote the companion novel and the then-upcoming miniseries. 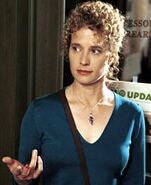 Add a photo to this gallery
Retrieved from "https://stephenking.fandom.com/wiki/Joyce_Reardon?oldid=71724"
Community content is available under CC-BY-SA unless otherwise noted.