Bill Denbrough
Jonathan Gregory Brandis (April 13, 1976 – November 12, 2003) was an American actor. Beginning his career as a child model, Brandis moved on to acting in commercials and subsequently won television and film roles. Brandis made his acting debut in 1982 as Kevin Buchanan on the ABC soap opera One Life to Live. In 1990, he portrayed the main protagonist Bill Denbrough in Stephen King's supernatural horror miniseries It.

Also in 1990, he starred as Bastian Bux in The NeverEnding Story II: The Next Chapter. In 1993, at the age of 17, he was cast in the role of Lucas Wolenczak, a teen prodigy on the NBC series seaQuest DSV. The character was popular among teenage female viewers, and Brandis regularly appeared in teen magazines.

On November 12, 2003, Brandis died at the age of 27 after hanging himself. Though he did not leave a suicide note friends advised that Brandis had been depressed about the state of his career and had been drinking heavily. He had also stated publicly that he intended to kill himself. 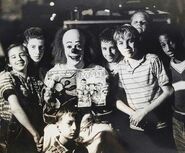