View source
Article Stub
This article is a stub, an article too short to provide more than rudimentary information about a subject. Please help the Stephen King Wiki by expanding it.

John Rainbird (died 1982) is a Native American, who is scarred because of the Vietnam War. He has lost an eye and is an agent/assassin of The Shop.

John Rainbird was played by George C. Scott in the 1984 movie adaptation.

He is a Native American working as an agent/assassin for The Shop and he is a badly scarred Vietnam veteran.

He is also a psychopath obsessed with wanting to know what is beyond life through his victims, which is why he likes to kill them while he can look into their eyes and watch them die correspondingly. It also gives him a feeling of power, which he wants to take with him after his death. He plans to kill Charlie, because he is convinced her death would give him special power, which he wants to take to the other world.

He killed Andy McGee and Joseph Wanless. After killing Andy, he tried to kill Andy's daughter, Charlie McGee, which he intended to do from the beginning once The Shop had finished with their experiments on her, but she melted the bullet and burnt him and James "Cap" Hollister to death (in the book).

He survives the night in which Charlie burned The Shop. He has burn scars because of it and intends to finish what he once started with Charlie this time with the help of the gifted children. 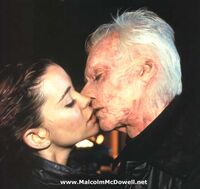 John Rainbird will be portrayed by Michael Greyeyes in the upcoming remake.