After being caught by Sheriff Alan Pangborn for trying to crack the safe in The Mellow Tiger, Ace was sent to Shawshank Penitentiary for 4 years. After being released in 1989, Ace moved to nearby Mechanic Falls. He got a job at Oxford Plains Speedway as a part-time pit mechanic. In 1991 he was shot and killed by Deputy Norris Ridgewick.

Ace was described by Gordie to have "sharp, handsome features" during his teenage years. As an adult, Gordie says his attractive looks were "buried in an avalanche of flesh" in his 30s. In a few pages in the confrontation between his gang and the boys during the storm, he had an "Elvis D.A" and a "Nylon school jacket", giving him a greaser type appearance. Ironically, many bullies in Stephen King's works tend to be greasers if set in the 1950s, '60s, or '70s. Since in the novel, Billy, Charlie, and Norman were described as having motorcycle boots at some points in the novel, it is most likely that he wore them as well. In Needful Things, it is said that during his teenage years, he wore a motorcycle jacket and engineer boots.

He is played by Kiefer Sutherland in the film, who resembles Ace in the books accurately. He also has Blonde hair. His hair is in some sort of crew cut with the sides slicked back and the top being somewhat spikey. He wears a black or white t-shirt with black chinos and penny loafers. He sometimes wears unbottoned shirts over the t-shirt. 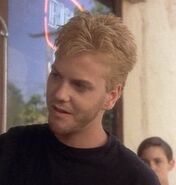