Jack was the husband of Wendy Torrance, the father of Danny Torrance and Lucy Stone, the son of Mark Anthony Torrence and an unnamed mother, brother to Becky Torrence and two unnamed brothers, uncle of Jackie Torrance, and the grandfather of Abra Stone. Jack was an author and a former teacher who accepted a position as the winter caretaker of the Overlook Hotel in Colorado, and had an opportunity to write a play.

Jack grew up in a middle-class catholic setting on the United States East Coast. Although Jack's father, Mark Torrence, was mentally and physically abusive towards every member of his family throughout Jack's childhood, Jack seemed to have developed a love for the earlier years of their relationship. He saw his father's loud arrivals home as a means to break the silence, and would bond with him in spite of the abuse. However, this affection would end at age 7 after Mark's treatment towards his wife left her concussed and hospitalized.

Jack's siblings despised their father for his abuse. While they also despised the role their mother's devout Catholicism played in convincing her to stay with him, Jack developed a hatred for her specifically for her meek, pitiful appearance. This trait would develop into a deep misogyny as Jack grew older, despising women for appearing weak, while also detesting his wife whenever she would stand up for herself.

Growing up, Jack would take his domestic abuse out on his classmates and animals. Jack got good grades in school, but often underwent punishment for lashing out and fighting other kids. After developing a liking for alcohol, his taste grew into full alcoholism in his 20s. Eventually, the only incident truly capable of shocking Jack into quitting drinking is an incident in which he harmed his son, Danny, during one of his binges. This set a difference between Jack and his father, as Jack truly regretted any instance of abuse towards his son, and held a small level of understanding of his own problems. Apart from the injury, Jack and Danny held a good relationship similar to the relationship Jack believed he had with his father earlier in his childhood.

The evil spirits that inhabited the Overlook Hotel would eventually drive Jack insane by way of drowning him in his alcoholism, past trauma, and fears of becoming as abusive as his father. The spirits possess him into attempting to murder his family with a roque mallet, which is revealed when his wife realized that 'redrum', the word that Jack had been writing on the walls, means murder backwards. His son, Danny, had developed psychic abilities he used to try to protect Jack from the hotel's influence, regaining his sanity. Wendy, Danny, and Dick Hallorann would escape the hotel, but unfortunately, Jack's sanity re-arrived too late, leaving him trapped in the hotel boiler room when it explodes. He dies and the hotel is left destroyed.

In the 1980 film, Jack (Jack Nicholson) does not get possessed by the hotel and is instead convinced into killing his family. At the end, he chases Danny through the hotel hedge maze. Danny (who'd played in the maze with his mother earlier in the film) recognizes how to escape, leaving Jack to freeze to death. In the 1997 miniseries, Jack was played by Steven Weber. Jack's final fate in the 1997 film was more true to the novel. Unlike the 1980 film, Jack's redemption was "rewarded" of sorts when a full grown Danny is seen graduating from a school. Jack's ghost momentarily appears to congratulate his son on completing his studies.

Jack appeared in the novel Doctor Sleep, in which Danny (as an adult, went by "Dan") discovered that he had a half-sister named Lucy, and a niece named Abra who had similar abilities to him — only more powerful. Dan saw a vision of his father at what used to be the Overlook Hotel near the end of the novel.

In the novel, Jack Torrance is a loving but troubled father who cares deeply for Wendy and Danny but does not know how to show it properly. Jack's alcoholism and violent temper had lost him a job as a teacher of literature at a prestigious New England prep school. One day he catches a student he'd cut from the debate team -- the boy had a severe stutter that impeded his ability to debate -- slashing his tires. Jack cannot not contain his fury and he beats the student on the spot, only regaining his senses after he seriously injures the boy. The school board of trustees decides to suspend Jack until they can figure out how to proceed. Jack's closest friend, fellow recovering alcoholic Al Shockley, gives Jack the opportunity to become the caretaker of the Overlook Hotel during the off-season so he could make a recovery and return to the school and prove he was ready to teach again. Jack, Wendy and Danny arrive at the Overlook Hotel on closing day. Jack is fairly surprised by how many people are still at the hotel on closing day. He and his family are given a tour around the hotel kitchen by Hallorann and the rest of the hotel by Stuart Ullman before they are left alone. As time goes by and the isolation of the hotel sets in, Jack’s behaviour slowly changes. Jack finds an old scrapbook detailing the hotel's history, including many incidents of violence and corruption among the hotel's several owners over the decades it has been open. Jack becomes obsessed enough with the hotel's sordid past that he wants to write a book about it. He makes a long-distance call to the hotel's manager, Stuart Ullmann, and antagonizes him with this knowledge.

Eventually, he goes mad thanks to the influence of the hotel’s ghosts and attempts to kill Wendy and Danny. His plan does not work though and Wendy and Danny escape with Dick Hallorann who came to save Wendy and Danny as the hotel boiler explodes, killing Jack and destroying the Overlook completely.

Jack Torrance does not appear in Doctor Sleep until the very end in which he appears as a ghost at the Bluebell Campgrounds, which was built over the Overlook Hotel and is the home of The True Knot looking over Danny, appearing proud.

In the film version of Doctor Sleep, Jack is instead seen at the bar of the Overlook Hotel, having taken Lloyd's place as bartender.

While terrorizing Beverly Marsh in a bathroom cubicle, It briefly takes on the form of Henry Bowers, yelling "HERE'S JOHNNY!" as Jack did to Wendy in Stanley Kubrick's film.

Jack makes a brief cameo appearance in The Shining level, as he is chasing Aech. However, Jack is seen backward as his face isn't seen at all. 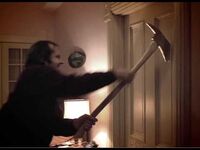 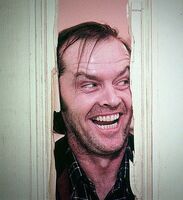 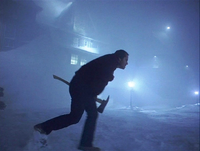 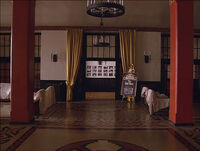 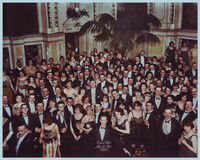