It by Stephen King

It Chapter Two is an American supernatural horror film and the sequel to the 2017 film It: Chapter One. Both films are based on the 1986 novel IT by Stephen King.

The sequel is an adaptation of the second half of the novel and is directed by Andy Muschietti and written by Gary Dauberman. The film is set in 2016, 27 years after the events of the first film, and stars Bill Skarsgård as Pennywise, along with James McAvoy, Jessica Chastain, Bill Hader, Isaiah Mustafa, Jay Ryan, James Ransone, and Andy Bean, who portray the adult versions of The Losers' Club, while Jaeden Lieberher, Sophia Lillis, Finn Wolfhard, Chosen Jacobs, Jeremy Ray Taylor, Jack Dylan Grazer, and Wyatt Oleff return from the first film as the younger "Losers".

Talks for an It sequel began in February 2016, when Muschietti revealed the plan to get production underway. By September 2017, New Line Cinema announced that the sequel would be released in September 2019, with Dauberman writing the script, and Muschietti expected to direct the film. Filming began on June 19, 2018, at Pinewood Toronto Studios and on locations in and around Port Hope, Oshawa, and Toronto, Ontario, and wrapped on October 31, 2018. The film is scheduled to be theatrically released in North America on September 6, 2019.

In 2016, Adrian Mellon, a young gay man, visits the local carnival in Derry, Maine, with his boyfriend Don Hagarty. A youth gang, lead by John "Webby" Garton, shouts gay slurs at them, causing Adrian (who talks back to Webby) and Don to leave the carnival. Both are ambushed by the gang and severely beaten, and Adrian is thrown off the bridge into the water below. In the riverbank, he notices Pennywise offering him help. Don catches up to Adrian, but he witnesses Pennywise bite and removes Adrian's heart. Mike Hanlon, the only member of the Losers' Club who stayed in Derry, overhears the incident on a police scanner and rushes to the scene. Upon realizing that It has resurfaced, Mike calls the other members of the Losers back to Derry.losers

The remaining Losers, now in their late-thirties, have small recollections of their childhood memories. Bill Denbrough is a successful author and screenwriter who often gets criticized for his stories' endings. Beverly Marsh lives as a fashion designer but endures an abusive relationship with her husband, Tom Rogan. Ben Hanscom has lost weight and is a successful architect. Richie Tozier has become a famous stand-up comedian. Edward "Eddie" Kaspbrak is a risk assessor, with an overbearing wife, and Stanley Uris is a partner in a large accounting firm. All are deeply disturbed by the phone call from Mike, but reluctantly agree to return to Derry, except for Stanley, who commits suicide.

The remaining members of the Losers' meet at Jade of the Orient, a local Chinese restaurant. When opening fortune cookies, they find a cryptic phrase that reads "Guess Stanley Could Not Cut It". Soon after, the remaining fortune cookies begin opening, revealing disturbing monstrosities inside including a spider with a baby's head, a one-winged bat, and an unborn bird covered in blood. During this time, a flashback occurs to show Henry Bowers escaping the sewers, however, upon arriving back at home, he is arrested for the murder of his father. Back in the present, Henry is in a psych ward and is being followed around by a Red Balloon, symbolizing It's presence. Henry escapes and is on the move to murder the members of the Losers' Club.

Disgusted, Bill confronts Mike over the situation and, after Mike reveals the real reason why he called them back to Derry, Richie and Eddie decide to leave. Bill comes with Mike back to his house, who drugs Bill's water with special properties that help Mike explain what he has learned about Derry over the years. Mike also reveals that he met with a Native American tribe who showed him the Ritual of Chüd, a way of destroying It once and for all. Both Bill and Mike return to the group's hotel, convincing Richie and Eddie to stay and finish what they started. At a baseball game that same night, a young girl named Vicki is mauled by Pennywise, when he tries to convince the girl he can fix her appearance.

Mike says that in order for the ritual to work, each Loser must have an artifact from their past to place in the ancient pottery. Beverly goes to her old home and finds a pack of cigarettes she hid as a child, in addition to Ben's love letter. Beverly encounters Pennywise disguised as an old lady named Mrs. Kersh. Pennywise attacks Beverly until she escapes but not before he reveals some of his origins. Bill goes to the sewer where Georgie was killed and recovers his paper boat before meeting a young boy on a skateboard named Dean, who tells Bill that he lives in his old house and often hears voices in the shower drains. Bill tells Dean to leave Derry and never come back but the boy refuses.

Ben goes to the town's high school and finds his old yearbook page, which Beverly was the only person to sign. Eddie goes to a pharmacy and recovers an inhaler where he sees his mother being tied up and viciously assaulted by the Leper in the basement. Richie goes to an abandoned arcade where he finds an old game token, which he remembers a bad memory of him being taunted for his sexuality before being attacked by Pennywise and a giant Paul Bunyan statue. The Losers use a shower cap from their clubhouse as a placement for Stan, and Mike finds a rock that started their fight against Henry Bowers and his gang.

As Eddie arrives home from the pharmacy, he is stabbed in the cheek by Henry Bowers. Eddie removes the knife and fights Henry, but he escapes before Ben and Beverly can catch him. Bill finds a message from Pennywise reading "Won't be there for him either" and realizes that Pennywise is going after Dean at the carnival. Bill arrives and chases Dean into a hall of mirrors, but is too late, as he watches Pennywise break through the glass and violently devour Dean, much to Bill's horror.

Bill, traumatized by his failure to save both Georgie and Dean, returns with a mission to murder It himself. The rest of the Losers, after killing Henry, follow Bill to the abandoned Neibolt house. Inside the group is split up by Pennywise who takes the form of Stanley's dismembered head to taunt the Losers Club, as well as a daunting message carved onto Ben's stomach, reading "home at last". The group ventures into the sewers and make their way into a chasm where Mike sets up the steps necessary for the Ritual of Chüd, including burning the artifacts they gathered from their old memories.

Mike instructs the others to chant a phrase, during which It's "deadlights" appear and make their way into the pottery. The ritual appeared to be a success, but a red balloon grows under the lid and out from the pottery, getting larger in size until it pops, revealing a giant version of Pennywise with spider-like legs and blades on the ends of them. Pennywise pressures Mike into telling the losers what he was hiding. That the Native Americans who originally perfromed the ritual were killed as the ritual itself does not work. Mike tries to defend himself by insisting the tribe only failed because they didn't truly believe It could be killed. The Losers are thrust into nightmarish scenarios in which they are forced to escape from, resembling memories from old places in Derry they spent time in.

Bill is forced to confront the fact that he pretended to be sick on the day of Georgie's death, inadvertently causing it, while Beverly finally realizes it was Ben who wrote her the love letter years ago. Richie is caught by the deadlights, but Eddie saves him; but he is mortally wounded by Pennywise.

The Losers regroup and realize Pennywise can be killed if they make him feel smaller than he really is. The Losers insult him and make him physically grow smaller and weaker, transforming into a small clown, until they are able to tear out his heart and crush it together, ultimately killing It. Richie tearfully tries to save Eddie, but Eddie dies from his injuries. The cave then starts to disintegrate around them. Richie tries to take Eddie’s body out of the cave but is held back by the others. The remaining Losers return to the quarry where they once swam together and console Richie over Eddie's passing while Beverly and Ben finally share a kiss.

In the aftermath of destroying It, Bill begins to write a new book while Mike is moving out of Derry, Maine. Bill is told by Mike about a letter from Stan that he wrote to every member of the Losers' Club before his death, explaining why he did it. Stanley committed suicide to "take himself out of the equation” knowing he couldn’t do it and would hold them back but knew they could defeat It. Meanwhile, Ben and Beverly start a romantic relationship and Richie returns to the bridge where he had once carved the initials of him and another person, now revealed to be Eddie. Richie re-carves them before leaving. With It destroyed, Mike moves away from Derry, ending the film.

On February 16, 2016, producer Roy Lee, in an interview with Collider, mentioned a second film, remarking, "[Dauberman] wrote the most recent draft working with [Muschietti], so it's being envisioned as two movies".[1] On July 19, 2017, Muschietti revealed that the plan is to get production underway for the sequel to It next spring, adding,[2][3] "We'll probably have a script for the second part in January [2018]. Ideally, we would start prep in March. Part one is only about the kids. Part two is about these characters 27 years later as adults, with flashbacks to 1989 when they were kids."[4][5] 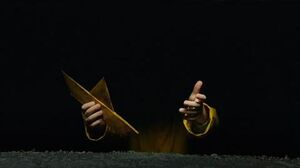 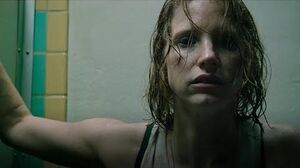 Retrieved from "https://stephenking.fandom.com/wiki/IT:_Chapter_Two_(film)?oldid=74841"
Community content is available under CC-BY-SA unless otherwise noted.