View source
watch 01:30
Who is Henry Bowers?
Do you like this video?
Play Sound

Henry Bowers is a supporting antagonist of the Stephen King multiverse.

He is the school and neighbourhood bully.

Henry is described in the novel as being very big and strong for a 12-year-old boy with his hair cut in a flattop spiked with a lot of Butch Wax that he keeps in his jeans. He always wears a pink motorcycle jacket with an eagle on the back and worn-out engineer boots. At only 12, his teeth are already rotting and it is very noticeable whenever he smiles. In the book he is also said to constantly smell like a mixture of sweat and juicy fruit chewing gum. In the 1990 miniseries, he sports a greaser pompadour and wears a brown leather jacket. In the film adaptation, Henry is 16 years old with a mullet and wears sleeveless T-shirts and torn jeans

It Part One & It Part Two

In It Part One, Henry appears as a violent and sadistic bully who terrorizes the Losers Club throughout 1960 with his gang. At one point, Henry and his gang kidnap Ben Hanscom and Henry attempts to carve his own name into Ben's stomach, before Ben breaks free and escapes. Henry later terrorizes Mike Hanlon in the Barrens, attempting to beat Mike with a rock. However, Mike is rescued by the rest of the Losers Club who start a rock war with Henry and his gang, driving the bullies off and uniting the Losers. Tricked himself by It, Henry eventually goes insane and murders his father. As the Losers enter the Neibolt House to confront It, Henry attacks them, attempting to kill the Losers. However, Mike manages to knock Henry down a well to his apparent death.

In a flashback in It: Chapter Two, Richie Tozier plays Street Fighter at the arcade with Connor Bowers during the time when the Losers are broken up. As Richie asks Connor to play again, having shared a moment with him, Henry enters with his gang and is revealed to be Connor's cousin. Seeing Henry, Connor claims Richie is acting weird and tells Henry that Henry never told him that Derry was "full of fucking fairies." Henry is shocked to recognize Richie and asks if Richie is "trying to bone my cousin." Henry angrily orders the humiliated Richie to leave which he does.

As seen at the beginning of It: Chapter Two, Henry survives the fall down the well and is ultimately washed out of the storm drains and into the Barrens by a flash flood with the bodies of It's victims. Returning home, Henry is arrested by the police for murdering his father muttering that he's not done yet and has to "kill them all." As he is taken into custody, Henry notices one of It's balloons floating by. Having completely lost his mind, Henry is locked in an insane asylum for the next 27 years.

After It becomes active again in 2016, It floats one of It's balloons in front of the asylum where Henry is locked up, causing him to excitedly chase the balloon along the asylum's windows before he is locked up in his room. Disappointed that the balloon is gone, Henry is surprised to spot it under his bed where Henry yanks on the balloon until it pops. It, in the form of Patrick Hockstetter's corpse, emerges from underneath the bed and offers Henry his knife back. Gleeful, Henry brutally murders an asylum guard and escapes, fleeing in a vehicle driven by Patrick's corpse.

Returning to Derry, Henry stalks the Losers Club and ambushes Eddie Kaspbrak in the bathroom after Richie Tozier leaves. Henry stabs Eddie in the cheek, stating that It told him that it's Eddie's time and that its "time to float." Eddie hides behind the shower curtain and when Henry gets close, Eddie stabs him in the chest with his own knife. Telling Henry to cut his mullet, that it's been almost thirty years, Eddie flees downstairs. However, Henry, though badly wounded, escapes out the window to continue his rampage. Watching from the broken window, Ben Hanscom witnesses a laughing Henry remove the knife and take off, experiencing a flashback to Henry trying to carve his name into Ben's stomach.

That night, Henry sneaks into the library where he purposefully pushes the book containing the story on the deaths of Mike Hanlon's parents in a fire off the shelf behind Mike. As Mike is distracted by the book, Henry charges him and the two men fight through library, but Henry gets the upper hand and pins Mike to the floor. As Mike struggles to keep Henry from stabbing him, Henry gleefully taunts Mike that he should've died with his parents in the fire and sadistically enjoys describing how they burned to death. However, before Henry can succeed in stabbing Mike, Richie impales him in the back of the head with an axe that was in one of the library's display cases, killing Henry. Richie jokes that Henry's death was long overdue before throwing up from having actually killed someone.

"I know you, kid. I know you, too. Where’s your glasses, four-eyes? Well, son of a bitch! The Jew and the fatboy are here too! That your girlfriend, fatboy? I got bones to pick with a lot of you, but I can let that go for today. I want that n***er. So you little s***s buzz off."

"Well, whaddaya know? The fat boy, the Jew, and the sissy. Four eyes and the patch girl, too. N***er, you know how to pick them: the Losers' Club."

―Henry to Mike Hanlon with the Losers

"And given me and my daddy grief for a long, long time! You like fireworks, boy, huh? What do you say to "Rocket in your pocket"?"

"My father will tan my hide."

―Henry to Bill, mimicking his stutter

"Summer’s gonna be a hurt train. For you and your fucking faggot f-f-friends."

"Shut up! I'm gonna carve my whole name out of this cottage cheese!"

―Henry to Belch before Ben escapes from him

―Henry to his friends about Butch after losing his knife

"You didn't listen to what I told you, did you? You should have stayed out of Derry. Your parents didn't, and look what happened to them. I still get sad everytime I pass by that pile of ashes, sad that I couldn't have done it myself."

―Henry's last words to Mike before he fell into a well

"You got a free ride this year cuz of your little brother. Ride's over, Denbrough."

"Did I fucking stutter?"

―To Vic, telling him to move seats[src]

―To Belch, about Patrick still being missing[src]

"Like lambs to a slaughter. Wouldn't you say fellas? Yeah, sure you would."

―Henry to Patrick after escaping from the asylum

―Henry to Eddie before stabbing his cheek

"You should've burned, Mike. Just like your druggie parents. Can you see them yet? Crisping? Like fried fucking chi—"

―Henry's last words as he tries to kill Mike 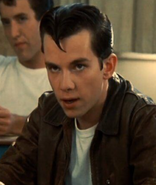 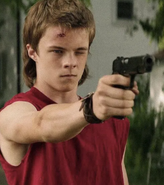