watch 01:29
Wiki Targeted (Entertainment)
Do you like this video?
Play Sound

At the time of the superflu epidemic, Harold is a sixteen-year-old resident of Ogunquit, Maine. He has an indifferent mother and a brutish and overbearing father. His popular sister Amy is shallow and self-absorbed; her best friend Fran Goldsmith later recalls that to his family, "it must have seemed like he had hatched from a cowbird egg or something."

Bullied at home and at school, Harold is tall, yet overweight (6'1 and 240lbs) unhygienic and unpopular. He has greasy black hair. He had a lot of acne, caused by eating junk food. He wears glasses. He is described by his sister as wearing the same boxer shorts until they stood on their own, due to their crustiness. She also describes that he masturbates in his pants. (He seems addicted to self pleasure). He had never experienced the pleasures of a woman. He finds an outlet in writing, writing strange stories in the 2nd POV and present tense and often affects a jaded, worldly attitude, when in reality he is merely immature and lacking in social graces; he overcompensates for his really low self-esteem by "acting out" in pompous and abrasive ways. He displays multiple symptoms of Asperger's Syndrome.

When the plague hits Ogunquit only Harold and Fran are left alive. Harold is aware that Fran does not care for his company, but she does eventually take compassion on him: he is a fellow survivor, and they will probably only get through the plague aftermath by relying on each other. Together they set out for the Stovington Plague Center in hopes of finding others who have survived the superflu epidemic.

Harold's intelligence and resourcefulness do prove to be assets along the way. In addition to improvising solutions to various problems, he begins to create signs (complete with highway directions) for other survivors during their journey to Stovington, then Hemingford Home, Nebraska, and finally Boulder, Colorado.

Near Twin Mountain, New Hampshire, Fran and Harold encounter Stu Redman. Harold, who now views Fran as his de facto girlfriend, is immediately hostile and rude, for which Fran berates him. In a sidebar Stu bluntly asks whether he is sleeping with Fran. Harold admits that he is not, but that he has become infatuated with her. Stu promises to not "squeeze him out", he just wants to join them in looking for survivors.

The three of them double back to Woodsville to pick up Glen Bateman and at Harold's insistance they head to Stovington; but just as Stu had warned, everyone there is dead. When the group realizes they are sharing the same dreams of Mother Abagail and nightmares about Randall Flagg, their destination shifts to Hemingford Home, Nebraska.

Their group continues to grow in size. Although neither Fran nor Stu has made any romantic overtures to the other, Harold remains antagonistic towards Stu. When Dayna Jurgens joins their group she and Stu show signs of warming up to one another — a fact smugly, though silently, noted by Harold. Emboldened, he makes an open bid for Fran's affections and is turned down flat.

Later on Harold spies upon Fran and witnesses her and Stu having sex. That night while Fran is sleeping, Harold steals and reads her diary. In it Fran has lambasted Harold's character, conduct, and even his hygiene. Faced with the harsh reality that Fran was never attainable in the first place, Harold begins to hate her as much as Stu.

The following evening Harold starts his own diary — referred to as a LEDGER, both because of the word embossed in gold on the book's cover, and because it is a list of debts Harold intends to settle. The very first sentence reads: "My great pleasure this delightful post-Apocalypse summer will be to kill Mr. Stuart Dog-Cock Redman; and just maybe I will kill her, too."

The group's destination changes from Nebraska to the Boulder Free Zone. Harold installs himself in a house on Arapahoe where, unlike most of the other "Zoners", he keeps his shades down and his door locked. Leo Rockway speculates that Harold "prays to the dark man" in secret there.

The cross-country journey, along with other physical demands of post-plague living, has caused Harold to drop weight. When he curtails his junk-food habit, his complexion clears up. He begins to pay more attention to his hygiene, as well as practicing a plastic smile and how to make disingenuous, lighthearted banter. He even volunteers for the Burial Committee in order to ingratiate himself to other members of the Zone; they begin to call this new, slimmed-down, superficially-likeable version of Harold by the nickname "Hawk".

However, Harold resents being passed over for both the ad hoc and permanent Boulder Free Zone Committees — a judgment-call made by those either skeptical of his youth, suspicious of his mental instability, or a combination of the two. He also still bears Stu Redman a "killing grudge", and is biding his time for the right opportunity.

Harold begins feeling the summons of Randall Flagg to go further westward to Las Vegas. Sensing that he is ripe for exploitation, Flagg sends Nadine Cross to seduce him. They proceed to indulge in every kind of kinky sex-play imaginable, except vaginal intercourse which is explicitly forbidden by Flagg. It is a frustrated and loveless arrangement, meant solely to manipulate Harold through sex, and the two end up despising one another.

On Flagg's orders Harold constructs a dynamite bomb, which Nadine plants in the house shared by Nick Andros and Ralph Brentner. It detonates during a Committee meeting, killing Nick and Susan Stern, maiming Ralph, severely injuring Fran, wounding and killing a number of innocent bystanders.

The two assassins immediately leave Boulder and head west. On the Colorado Western Slope, just beyond the Loveland Pass, Flagg arranges an accident: Harold's motorbike skids on an oil slick into a ravine. The impact leaves him with a shattered leg and multiple internal injuries. Nadine refuses to help him, explaining that this fate was chosen by her — and that it is actually kinder than the one Flagg had planned, had Harold actually arrived in Vegas. Infuriated by this turn of events, Harold takes out the revolver that Nadine assumed he had lost, and briefly senses Flagg's shock as he, too, had not expected Harold to still have any fight left. He fires one shot that narrowly misses Nadine's head, and Nadine flees.

Harold lies abandoned for several days, during which his leg putrefies and becomes gangrenous, while the vultures circle, waiting. He has plenty of time to think about the sequence of events that led him to this point, and to reflect that he had had a genuine chance for a new life in Boulder, which he had wilfully squandered in the name of petty revenge.

He writes a suicide note initially stating that "I was misled", but quickly rejects that statement as cowardly and dishonest. He continues writing, taking responsibility for his actions, and expresses remorse and apologizes for them, though he knows he cannot be forgiven. He signs this note, "Hawk," as a way of trying one final time to accept the best version of himself that had existed briefly in Boulder. Then he sticks his Colt in his mouth and pulls the trigger.

Not long afterward, Harold's remains are discovered by Stu, Larry, Ralph and Glen. They do not bury him, but Stu does remove the gun from his mouth and remarks that Harold’s actions were a waste not only of Nick and Susan, but of himself as well. Stu finds himself wanting to avenge Harold as much as the other victims when he meets Randall Flagg. In the miniseries, Harold's body is not found but rather Stu psychically senses his death.

"They were a couple of outsiders, and outsiders hatch plots. It's perhaps the only thing that keeps them sane. (Remember to put that in the ledger, Harold thought...)"

"My great pleasure this delightful post-Apocalypse summer will be to kill Mr. Stuart Dog-Cock Redman; and just maybe I will kill her, too." 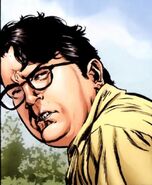 Owen Teague as Harold in the 2020 miniseries in front of his famous sign.

Frannie and Harold share a quiet moment of contemplation in the 2020 miniseries.

Harold prepares to meet his destiny. Corin Nemec as Harold in the 1994 miniseries.

Retrieved from "https://stephenking.fandom.com/wiki/Harold_Lauder?oldid=81576"
Community content is available under CC-BY-SA unless otherwise noted.