The Grady Twins make a larger and more prominent appearance in the 1980 adaptation. They are first mentioned by Stuart Ullman in the interview. They are seen for the first time when Danny Torrance passes out when he has a vision. They are seen a second time on Closing Day while Danny is in The Games Room while his parents tour the hotel with Ullman and Watson. They stare at Danny before walking out of the room, hand in hand. They are seen again in a brief vision when Danny attempts to enter Room 237. Eventually, Danny encounters them in a hallway on his tricycle. They say hello and ask Danny to come and play with them, to which Danny has visions of their corpses in the same hallway, their blood splattered everywhere on the walls and floor and an axe lying on the ground. Danny covers his eyes and when uncovering them, they are gone. They do not appear again. 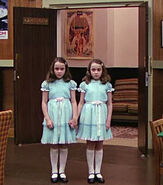 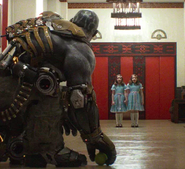 Retrieved from "https://stephenking.fandom.com/wiki/Grady_Twins?oldid=64823"
Community content is available under CC-BY-SA unless otherwise noted.