Glenn Chadbourne (born October 19, 1959) is an American artist. He lives in Newcastle, Maine. He is best known for his work in the horror and fantasy genres, having created covers and illustrated books and magazines for publishers such as Cemetery Dance Publications, Subterranean Press, and Earthling Publications. Mr. Chadbourne is known for his sense of humour and down to earth manner, as well as the stark honesty of his work.

He wrote, illustrated, and self-published a few comics called ChillVille and Farmer Fiend's Horror Harvest in the early 1990s. He eventually met Rick Hautala and was asked to illustrate his short story collection Bedbugs. After Cemetery Dance Publications printed Bedbugs in 1999, things began to click for Mr. Chadbourne, and he has since illustrated work for many of the top names in the horror genre. 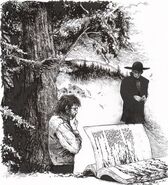