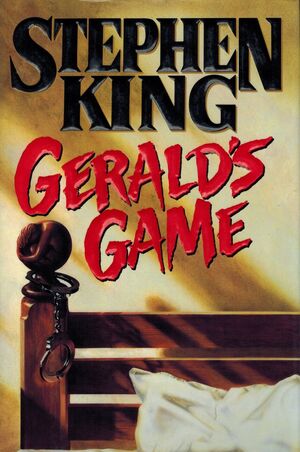 Gerald's Game is the 31st book published by Stephen King; it was his 26th novel, and the 21st novel written under his own name. The book was released by Viking in May of 1992.

The novel, along with Dolores Claiborne, was originally conceived as part of a larger work to be entitled In the Path of the Eclipse.

The story begins with Jessie Burlingame and her husband Gerald in the bedroom of their secluded cabin in western Maine, where they have gone for an off-beat romantic weekend. Gerald, a successful lawyer with an aggressive personality, has been able to reinvigorate the couple's sex life by handcuffing Jessie to the bed. Jessie has been into the game before, but suddenly balks. As Gerald starts to crawl on top of her, pretending her protests are fake, she kicks him in the stomach and in the groin, and he then falls from the bed to the floor, hits his head, has a heart attack, and dies.

Jessie is alone in the cabin and unable to move or summon help. There is nothing to do but see if anyone shows up. As days pass and Jessie becomes more desperate, she must face a traumatic incident in her childhood to overcome the circumstances and leave the bedroom alive.

During her ordeal she is visited by a mysterious stranger that she calls the Space Cowboy, although she is not sure if he is real or if she is just halucinating.

In 2017 Netflix released a film adaptation of Gerald's Game. It was written and directed by Mike Flanagan and starred Bruce Greenwood, Carla Gugino and Kate Siegel.

Jessie sees Dolores Claiborne during her vision but she doesn´t recognize her.