View source
watch 01:37
Georgie Denbrough
Do you like this video?
Play Sound

George Elmer "Georgie" Denbrough is a minor character in the novel IT, the miniseries and its 2017 film adaptation IT, and a posthumous character in IT: Chapter Two.

He was the younger brother of Bill Denbrough and the posthumous brother-in-law of Audra Phillips.

On a stormy day, Georgie asks his older brother (Bill Denbrough) to make him a paper boat. Bill agrees, and makes the S.S Georgie. As Georgie was about to go out for the boat's maiden voyage, Bill uncharacteristically told Georgie to not go far and to be careful. Georgie assured Bill that he would be.

Georgie, initially enjoying himself, let the boat sail down the street in the rain. Eventually it slips into the sewer, upsetting Georgie. Seemingly out of nowhere, Pennywise pops up in the sewer, trying to chat with Georgie. At first, Georgie hesitates in talking to the clown, and refuses his boat when offered (as his father had told him not to take things from strangers). The clown introduces himself as "Pennywise The Dancing Clown", claiming that they were no longer strangers. Feeling like Pennywise had him on the ropes, a smiling Georgie was about to turn and leave, and told Pennywise that he had to go. Before he could, Pennywise stopped him by showing him his boat, which made Georgie become overjoyed to see it again. Pennywise beckoned Georgie to take his boat, with promises of cotton candy, rides, and balloons of all colors. When Georgie asked if they float, Pennywise responded to the affirmative. However, when Georgie reached down to take his boat, Pennywise told him that when he was in the sewers with him, he would float, too. Suddenly, Pennywise took the boat away from Georgie, grabbed him by the arm, and made him scream in terror. It transformed into Georgie's worst nightmare, ripped his left arm off, and left him to bleed horribly to death. Georgie was only heard by a nearby man named Dave Gardener and actually seen by the same man to witness him dead by the sewer.

Later in the summer of 1958, Jake Epping, upon arriving at Derry, learned that Georgie's death, along with the deaths of at least half a dozen other victims, were apparently hushed up by the town, enough that the newspapers of the town "[didn't] play it up".

George's death was the first in the fall of 1957 and it was what drove Bill to defeat It. Although in 1958, It threatened to appear to Bill as George, It never did so until 1985 (excluding Its appearance before Richie and Bill in Georgie's room; when It sprung from the canal in a photo wearing Georgie's face), in the sewers. When Bill saw It as George, he worked through his grief and overcame Its ruse. In the film, It did take on the appearance of George in both timeframes, with the 1958 scene being when the Loser's Club formed a circle, and George was the form that was chosen to try to break Bill's hold. In 1985, It was more subtle and appeared at a quieter point when the Losers tried to find It's lair. After finding and following Georgie's boat, George appeared, blamed Bill for sending him outside, and caused his boat to go down the drain. Bill was aghast until Beverly firmly said that was not George.

In the 1990 miniseries. Georgie wants Bill to read him a story. Bill in an act of annoyance tells him to bug someone else. Georgie then leaves Bill's room but, before he can Bill stops him and gives him a paper boat. Bill instructs Georgie to get the wax in the basement. He walks to the basement and sprints towards the wax and quickly runs back out in fear. Once the boat is finished. Bill tells Georgie to be careful to which Georgie says "I will" before scurrying away. As he sails his boat on the streets, the stream starts getting faster with Georgie not fast enough to catch up. Georgie dodges a few obstacles like a road sign before losing his boat in the sewer. He peers through the drain and attempts to walk away before hearing a voice. Soon a clown popped out of nowhere. The clown tells him he goes by the name "Pennywise".

Georgie and Pennywise hold a fairly normal and relaxed conversation. However, Pennywise's eagerness betrayed him, as he spoke in an eerily aroused tone, especially with his they float speech. Georgie's death happens off-screen, with the encounter ends with a close up of Pennywise's changed transformed face, showing yellow eyes and fangs before transitioning to Georgie's funeral. However, it is mentioned that Georgie's arm was ripped off, with his ghost in the sewers appearing without an arm as well.

Georgie is first shown in Bill's room looking out the window and drawing a smiley face in it while Bill makes a paper boat for him. Georgie asks his brother if he'll get in trouble for going outside. Bill says that he would come if he wasn't "dying" (due to him having the flu). Bill asks Georgie to go to the basement to get the wax so that the boat can "Float". Georgie goes to the basement and gets the wax. He then runs because of a noise he heard. Bill then put the wax on the boat. Bill gives the boat to Georgie and says "She is already Captain". Georgie asks why Bill called the boat "She". Bill then answers that you "Always call a boat she". Georgie then calls the boat "She" and gave Bill a final hug. Georgie then says goodbye to Bill and says he will see him later. When Georgie got outside he waved to Bill, with Bill telling him on the Walkie Talkie to "Be Careful". Little did either of them know that this would be the last time they would see each other.

Georgie sails the boat down the street and enjoys himself. He then runs into a caution boarder. The boat keeps sailing and heads for a drain. Georgie then runs after the boat to save it. He then shouts "NO" as he runs to the boat. He barely misses the boat. He looks into the sewer, moaning that Bill is going to kill him. A clown pops up from the sewers and scares Georgie. At first hesitant, he has a conversation with the clown, who refers to himself as "Pennywise the Dancing Clown". Georgie soon gets comfortable talking to Pennywise, even managing to laugh after the clown jokes a little. However, Georgie grows uncomfortable when Pennywise stops laughing and starts growling at Georgie. At that point, he then states that he has to go. Pennywise then holds the boat up to Georgie and firmly tells him to take it. Georgie reaches for the boat and Pennywise grabs his right arm, grows razor-sharp teeth and bites his arm off. Georgie then screams and tries to crawl away while slowly bleeding out on the street. But Pennywise drags Georgie into the sewer as he calls Bill's name.

Next year, Georgie is repeatedly mentioned by Bill, who continues to insist that Georgie is not dead but missing, which serves as a source of conflict with his grief-stricken parents. His friends, however, willingly play along with his beliefs, not wanting to admit to Bill that they believe Georgie to be dead as well.

The image of Georgie is used by Pennywise to lure Bill to his basement. He appears normal at first, appearing with both arms and innocently apologizing to Bill for having lost the boat in the storm. However, "Georgie" soon sneers cruelly and turns into a rotting corpse repeating "You'll float too". At this point, it is revealed that "Georgie" is nothing more than a rotting puppet that Pennywise uses in a mock ventriloquist act. Having lured Bill into the bottom of the steps, Pennywise shoves Georgie into the water and charges at Bill, missing him. Pennywise then slithers away into the water like a snake.

During the attack at the house on Neibolt Street, Pennywise mocks Bill for not considering him to be real, exclaiming "This isn't real enough for you, Billy? I'm not real enough for you? It was real enough for Georgie!". The realization that Georgie encountered It horrifies Bill, who is unprepared for Pennywise's charge. Later on, after the Losers barely manage to escape Neibolt, Richie snaps and tells Bill that Georgie is dead and to stop trying to get the other Losers killed because of him. Bill, refusing to believe that Georgie is dead, angrily demands an apology from Richie and punches him in the face. This event serves as the breaking point for the Loser's Club, with Ben, Richie, Mike, and Stan refusing to continue fighting It.

Afterwards, Georgie appears to Bill in the sewers in a successful attempt to separate him from his fellow Losers. Deep in the Lair, Georgie approaches Bill without his yellow raincoat and his right arm but holding the paper boat made by his brother. Georgie claims to have been stuck in the sewers without being able to escape, having been caught because Pennywise told him that he could have his boat back. Bill, relieved to see his brother, asks him if "she" was fast, with Georgie mentioning how he couldn't keep up with "it", leading Bill to realize that "Georgie" is Pennywise, having taught the real Georgie that boats are called "she". Although he tells "Georgie" that he wants nothing more than to bring him home and that he loves him, Bill knows he is not talking to Georgie and shoots him. Pennywise then reveals himself and engages the Losers in battle. After defeating It, Bill finds Georgie's discarded and tattered yellow raincoat and breaks down, finally accepting his younger brother's death.

―Georgie to Bill thinking he is going to die

―Georgie to Bill after seeing vomit comes out from his nose

―Georgie to Bill after making the paper boat

―Georgie after losing his boat in the sewer

―Georgie to IT as he want his boat back

―Georgie to IT about his friends and Bill

―Georgie to IT about Bill being sick

"I'm not supposed to take stuff from strangers."

―Georgie angrily to adult Bill in IT: Chapter Two

Blood coming out from Georgie's photo. 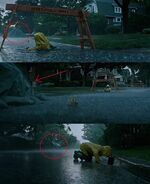 Getting his boat made

Georgie with Bill after his boat was made 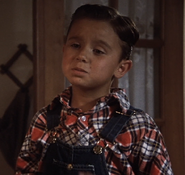 IT in Georgie's form/Georgie puppet 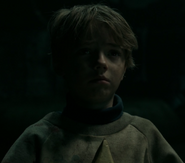 IT in Georgie's form