Firestarter is the ninth book published by Stephen King; it is his eighth novel, and the sixth novel under his own name. The book was released by Viking in 29 September 1980.

In 1969, a secret government agency called The Shop, made experiments with a chemical drug called Lot Six. Lot Six altered the chromosomes on the test subjects, to experiment with psychokinetic powers, such as telekinesis. Two of the test subjects, Andy McGee and Vicky Tomlinson fell in love, and later married. They had a child, who they named Charlie, who was born with multiple abilities, including Pyrokinesis, the ability to start fires with her mind.

Eight years later, Andy and Charlie flee across America, constantly looking for sanctuary from a group of government agents from The Shop, who are trying to find them, capture them, and harness their powers for the military. Charlie and Andy flee from New York to Albany hitching a ride in a taxi and later to a motel in Hastings Glen where they spend the night.  With The Shop on their heels, Charlie and Andy leave the motel and hitch a ride provided by Irv Manders who promises to take them closer to St Johnsbury. Under the aliases, Roberta and Frank stay for lunch at the farm provided by Norma Manders. The couple already aware of the police search is suspicious whether Charlie may or may not have been held against her will by Andy. Irv, however, realizes there is a different story to it. But before he can be convinced by Andy, The Shop shows up at farm. Irv gets shot. To protect her father, Charlie sets The Shop agents on fire, the farm burning along with them. In Irvs Willys' Jeep, Charlie and Andy take off to Vermont. In Washington, John Rainbird extracts every piece of information out of Dr. Wanless about Charlie McGee. Then he kills him. Two days later Charlie and Andy arrive at the cottage in Tashmore Pond. The provisions untouched they settle down for the night. They even stay for winter where Andy crosses the frozen pond into the city to buy clothes and food. At the end of winter he decides its time to write to the newspapers. But The Shop gets to the letters first.

In a flashback to 1980 Andy experiences an odd feeling at work and goes home. There he finds his wife Vicky, dead at the hands of The Shop. For some time they had been aware of taps on their phones and people watching them, but he had not expected it would come to this. Andy pursues the kidnappers of his daughter and finds her at a rest stop where he uses his abilities to incapacitate them, then taking Charlie to safety.  Andy slowly regains his powers and initiates an escape attempt.  Rainbird figures out the plan and stops them, killing Andy in the process. Grief turns to fury as Charlie uses her now perfected pyrokinesis to battle her way out of the compound, killing many, and destroying much of the compound in the process.  After spending time with a couple that had previously sheltered them, Charlie flees again, just as Shop agents discover her location, once again staying one step ahead of The Shop, and goes to the Rolling Stone magazine to give an interview telling her story, because she sees it as an "unbiased source with no ties to the government".

Andy McGee: He is the father of Charlie. He is on the run from some men that want to capture him and his daughter. He took part of the experiment by Dr. Wanless that offered two hundred for its volunteers, where subject would be gave a small doze of Lot Six.

Joseph Wanless: He was in charge of the experiment where he gave doze of Lot Six to twelve subjects, which included Andy McGee and his future wife Vicky Tomlinson. He was know by the student in 1969 as the Mad Doctor.

Cab Driver: He pick ups Andy and Charlie while fleeing from two men in business suits were chasing them. He was deceived by Andy with a mental image that the two men were chasing a black guy in a checkered cap when the two men yelled to be policemen. He believes that black people are junkies in New York City. Andy uses his mind to control and deceive the driver with a fake five-hundred dollar bill, after realizing the driver to be a pushover.

Quincey Tremont: The former roommate of Andy McGee in college and former Psych major. He convinced Andy to be part of the experiment by Dr. Wanless that offered two hundred for its volunteers. This was done due to Andy's financial situation, but he warms Andy that Wanless is a Mad Doctor and also a behaviorist. He did not take part in the experiment due to hating needles and not needing the money.

Vicky Tomlinson: The wife of Andy McGee and the mother of Charlie McGee. She decided to be part of the experiment by Dr. Wanless after her friend got fifty dollars in one last semester. She was aware of Wanless reputation of Mad Doctor and agreed to still take in the experiment after an incident with her former boyfriend, George. She had died when she was confronted with the men who are chasing her husband and daughter.

Mrs. Mishkin: The second-grade teacher of Charlie. She let out Charlie with some "friends" of Andy, when the "friends" brought a note from Andy.

George: The former boyfriend of Vicky Tomlinson before she met Andy McGee. He was in one of Wanless's classes and the Psych Department. He had forbidden Vicky to take part in the Wanless experiment, which she ignored. He didn't tell her anything about Wanless experiment but that he didn't trust Wanless.

Quincey's Girlfriend: A grad assistant of Wanless who took Andy McGee's application during Andy's time as an undergraduate from Harrison . She ask him some questions before being accepted.

The story was adapted into a film in 1984, with a made-for-television, sequel Firestarter 2: Rekindled, following in 2002. A television series called The Shop is also planned as a sequel of Firestarter.

In 2021 the filming of a Firestarter remake commenced, directed by Keith Thomas. The movie features Zac Efron as Andy McGee and Michael Greyeyes as Rainbird.

The audiobook version of Firestarter is read by Dennis Boutsikaris. 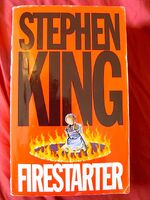 Hodder Paperback edition of 2012 published by Hodder and Stoughton
Community content is available under CC-BY-SA unless otherwise noted.
Advertisement