Estelle Stella Horan is a character in Carrie. She is a former neighbor of Carrie and Margaret White.

Estelle Horan and her mother, are former neighbors of Carrie and Margaret White.

She wears a bright print shifts and smoked amber sunglasses, her hair is described as black-streaked blonde. She drives a neat maroon Volkswagen Formula Vee with a smile decal on the gas cap with a green flag ecology sticker on back window. She has a son and daughter whom are certified members of Southern California Sun n' Fun Crowd.

When she receives news about what happened to Chamberlain, Maine, her past begins to haunt her and she later relates under stress, how she knew Carrie White and her mother and how she witnessed the stones falling into the house of the Whites, when her mother was mistreating Carrie because she had contact with her.

Mrs. Horan (Mother)
Estelle Horan was meant to appear in the 1976 film of Carrie, But the scene of The Rain Of Stones was cut off from the film.

It is unknown who portrayed her.

Estelle Horan was the neighbour of the Whites.She had a good relation with Carrie the first time she met her, but hated her mother because of her attitude towards her. It was the same day, when she witnessed the asteroids falling into the house of the Whites after the mother of Carrie was punishing her, because she had talked to her.

It is implied that the asteroids fell because of Carrie in order to stop the mistreatment of her mother.

Estelle Horan appears in the alternate opening, where she witnesses the stones falling on Carrie´s house after a confrontation with Carrie White´s mother. She also appears as an older woman testifying before the White Commission. 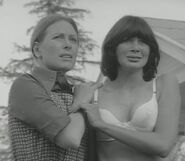 Add a photo to this gallery
Retrieved from "https://stephenking.fandom.com/wiki/Estelle_Stella_Horan?oldid=75486"
Community content is available under CC-BY-SA unless otherwise noted.