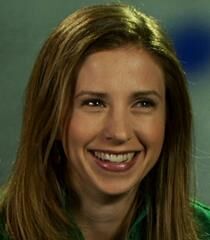 Emily Jean Perkins (born May 4, 1977) is a Canadian actress and model, best known for her roles as Crystal Braywood in the TV series Hiccups, young Beverly Marsh in Stephen King's It, Punk Receptionist in Juno, and Brigitte Fitzgerald in Ginger Snaps.

Emily Perkins started her acting career in 1989. As a child actress she was in three made for television movies: Small Sacrifices, Anything to Survive, and Stephen King's It.

She is married to Belgian Canadian academic Ernest Mathijs and have children.