Ellen Rimbauer is the protagonist character of author Ridley Pearson's best selling novel titled The Diary of Ellen Rimbauer: My Life At Rose Red, published in 2001. Ellen then is transformed into the evil spirit and main antagonist in Stephen King's 2002 ABC made for TV miniseries Rose Red. In the television film she was was portrayed by Julia Campbell.

Ellen Rimbauer is a very tragic villain. She is transformed from a submissive women who just wanted to be loved and blessed with a beautiful family and home, into an undead pawn controlled by the dark forces inhabiting her environment. Ellen's story is a sad and frightening supernatural tale about love, hate and the unfairness many women of her time experienced as victims of sexual repression and Victorian morality.

According to information revealed in the diary of Ellen Rimbauer's and at various points in the miniseries, the house which was eventually named Rose Red was built in 1906 by John Rimbauer for his significantly younger wife, Ellen. John Rimbauer owned an oil company, and used much of his wealth to build the vast mansion, which was an incredibly elaborate Tudor-Gothic style Victorian home which situated on 40 acres of woodland in the heart of Seattle, Washington, in the United States. The site was a Native American burial ground (a common motif in early works by author Stephen King). The house appeared cursed even as it was being constructed: Three construction workers were killed on the site, and a construction foreman was brutally murdered by a co-worker.

After the wedding, the Rimbauers took a grand, leisurely Honeymoon during the struture of the house which lasted an entire year. They circled the globe on some of the most luxurious first class trains and ocean liners like the Ocean Star. John Rimbauer's favorite part of the tour was Africa. Ellen didn't enjoy it quite as much. Infact she nearly died during the vacationing visit in Africa. Ellen fell very ill (from an unspecified sexually transmitted disease given to her by her husband), an unmentionable disease carried by men and suffered by women". Luckily, Ellen made the acquaintance of Sukeena, a local exotic tribeswoman who nursed Ellen back to health. Ellen and Sukeena became very close and formed a nearly unbreakable bond. As a result, Sukeena accompanied the Rimbauers back to the United States to work as a full time servant in the newly completed Rose Red mansion. The Rimbauers soon had two children, a boy named Adam because he was the first, and a girl named April who was born on April 1. (April was born with a deformed withered left arm). Ellen believed April's deformity was caused by the "African Fever" she experienced on her Honeymoon. Regardless, Ellen loved both her children dearly, but John only cared for his son Adam. As time went on Ellen quickly became unhappy with her marriage to her philandering and neglectful, cheating husband. In John's mind, Ellen had fulfilled her purpose by giving him a son, and was free to do whatever she pleased in Rose Red, such as spoiling herself with various luxuries such as buying fancy edwardian dresses and planting rose bushes on the property of her home. While John stayed busy with his oil business and was too occupied with his many extramarital secret affairs.

Tragic deaths and mysterious disappearances continued at the house from time to time. One of John Rimbauer's friends died of a bee sting in the solarium, and John Rimbauer's business partner (who was a Homosexual whom Rimbauer had cheated out of his hard earned share of their oil fortune) hung himself in front of Rimbauer's children as a sort of twisted revenge. Before he killed himself he tossed his cowboy hat to Adam and a red rose to April. Not much later the suicide causes April to stop speaking, apparently due to being traumatized. It is then when Ellen slowly realizes that something is seriously wrong with Rose Red. Soon after Adam was sent away to attend boarding school, leaving just before the evil of Rose Red truly awakened. However, Ellen's plans to successfully flee are haulted as one day, six-year-old April vanished into thin air and mysteriously disappeared while playing tea-time in the kitchen, never to be seen again. Sukeena, who was watching April during the time she went missing was convinced that the house was responsible. It is also hinted that Rose Red became jealous of April and Ellen's relationship because the house wanted Ellen all to itself and to show Ellen who was really in charge. With April lost somewhere deep inside the walls of the house, this guarantees that Ellen will never leave, not without her abducted child. Sukeena was used as the skapegoat even with Ellen's defense and she was blamed by John for the incident while viciously tortured by the local police after being suspected of having something to do with April's "murder". John Rimbauer (whom his wife suspected of adultery) committed suicide by throwing himself from a stain-glass window of one of the mansion's towers shortly thereafter (an event which the miniseries later shows to have been John's murder at the hands of Ellen Rimbauer and Sukeena who had found out about his affairs and just made it look like a suicide.)

As revealed in the miniseries, Ellen Rimbauer and Sukeena remained close and it is hinted their relationship may have been something more than just friends. Ellen reefers to Sukeena in her diary as "my friend", and then after Johns death she calls Sukeena her "Sister". And the two woman along with several maids continued to live in the house. After a spiritualist seance, Ellen believed that if she continued to build the house, forever extending its architecture, she would never die. Madame Stravinsky, the psychic who spoke to the house during the seance explained why men ended up dead and women missing. It was because the house could see into the souls of the people who entered and knew if they were good or bad. Rose Red could sense the power hungry evilness that lurked inside the men and how the women were merely victims of that evil. So taking these women to live here in spirit was the house's way of protecting them, and freeing them from the badness of the men around them. It all made so much sense! But Madame Stravinsky cautioned Ellen to not get too comfortable in the house because Rose Red was like a Vampire, also feeding off the evil souls of these men and could very well have it’s own bad intentions. It is also hinted that Mr. Rimbuear's own selfish and greedy passions were encouraging Rose Red's appetite. Thus concluding that Rose Red could be good and bad, as long as you kept the house happy. After speaking with the psychic, Ellen's life had changed forever, she never had another attack of her African fever which she suffered from time to time.

Ellen Rimbauer then used nearly all of her dead husband's immense fortune to continually add to the never-ending growth of the home over the next several decades, enlarging it significantly (in a plot element reminiscent of the real-life construction of the Winchester Mystery House). Ellen also clinged on to the hopes of believing that if she kept building the house, it would release her lost daughter April and give her back. Ellen even began to hear voices at night promising that if she built a tall tower in Rose Red that the house would reunite her with April again.

Yet mysterious disappearances continued: Rose Red mercilessly "swallowed" people up and refused to give them back. The heart of the house would feed off of its stolen victim and use their life force to become more and more powerful. After her husband's death, Ellen grew lonely and began throwing lavish parties and banquets at the mansion, inviting blue blooded aristocrats, rich socialites and popular celebrities and movie stars. A woman known as the glamorous Deanna Petrie, a beautiful and spunky actress and secret lover of Ellen Rimbauer's, went missing during one of these social events, thus sealing the reputation of Rose Red forever. Despite numerous searches, the only thing ever found of Deanna was her fancy earrings, and after Deanna's mysterious disappearance, no parties were ever thrown at Rose Red again. A few years later Sukeena went missing as well and only the maids who worked in the house and Ellen herself inhabited the property. Eventually Ellen disappeared in circa 1950 at the age of 70, she was last seen slowly wandering the hallways of her mansion while on one of her daily strolls. Those who had seen her during this time said she looked dazed as if apparently just day-dreaming, lost in her own thoughts. After Ellen's disappearance Rose Red had enough power to began to grow on it's own, but very slowly so no one would really notice.

Several characters in the miniseries relate that, for several years after Ellen Rimbauer's disappearance, only servants occupied Rose Red. But since the Rimbauer fortune had long been spent, they no longer wanted to be there because they were not being paid to stay. Even the most loyal servants of Ellen were simply too scared of the house to live there, fearing they would disappear just like Sukeena did. So the servants eventually quit their jobs one by one and never returned. Adam Rimbauer, who inherited the house, lived there for a short time with his wife, but left after witnessing several paranormal events such as hearing voices and seeing the ghost of his long lost little sister April. Adam even witnessed many rooms significantly change their size or appearance and opened doors leading into parts of the house that did not match the layouts on the floor plans on Rose Red's blue prints. When Adam left, he allowed the house to be abandoned for a long time. Adam was one of the only ones who the house did not touch, probably because he never was close to his mother Ellen whom the house had become rather possessive over. However, after his death, his wife sold off many of the home's antique furnishings. She generated some income by permitting the fictional "Seattle Historical Society" to give tours of the house; these ceased in 1972 after a participant disappeared while on a tour of the mansion. The only thing ever found of this female victim was her purse, completely torn to bloody shreads. Even investigations of the grounds and structure were conducted in the 1960s and 1970s to seek an explanation for the strange sounds, lights, and other phenomena alleged to have occurred there and reported by neighbors of the area who lived near the mansion. But these ended with no satisfying answers and the house began to fall into disrepair and was left alone for decades, letting Rose Red "fall asleep", or so everyone believed.

All in all, the history of Rose Red counts up to 26 people who disappeared or died within it. Interestingly, the evil spirits only killed men, while women simply dissapeared and became part of the house.

Basically, the evil spirits within the heart and very essence of Rose Red had grown found of Ellen Rimbuear because she knew how to make the house happy. In a strange way the spirit that possessed Rose Red had fallen in love with Ellen and that is why it eliminated or claimed anyone and everyone that was dear to Ellen because of its jealousy. Ellen's daughter April, Deanna the movie star, Sukeena etc, were all threats to the house, because Rose Red wanted Ellen to only love the house and no one else. In a twisted way, the house ate people out of love, before eventually consuming Ellen as well. 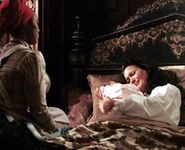 Add a photo to this gallery
Retrieved from "https://stephenking.fandom.com/wiki/Ellen_Rimbauer?oldid=76445"
Community content is available under CC-BY-SA unless otherwise noted.