Don Hagarty is a minor character in the book IT and the film IT: Chapter Two. He is a young gay man in Derry, Maine and was dating Adrian Mellon at the time of his death.

Before Adrian came into his life, Don was planning on leaving Derry, not just because of its violent homophobic attitude, but also because of the evil presence that lives in the sewers under the town. Before Adrian leaves, the two attend a town fair and are harassed by 3 homophobic teens, John "Webby" Garton, Steven Bishoff Dubay and Christopher Phillip Unwin on the way home. After the teens throw Adrian over a bridge and continue beating up Don, Officer Andrew Redemacher arrives to stop the fight. When Don and Chris witness Pennywise attacking Adrian under the bridge, they try to tell Officer Andrew, Webby and Steven, but they didn't see anything.

After Adrian's body was found and buried in the Derry Cemetery, Webby, Steven, and Chris were sent to prison. Nobody mentions Pennywise at the trial and Don leaves Derry. 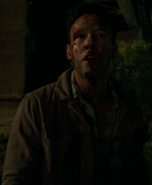 Add a photo to this gallery
Retrieved from "https://stephenking.fandom.com/wiki/Don_Hagarty?oldid=75189"
Community content is available under CC-BY-SA unless otherwise noted.