Stephen King Wiki
Register
Don't have an account?
Sign In
Advertisement
in: Characters, Unsourced quotes, IT,
and 5 more

In the book, he is described as being a scruffy, typical ten year old boy. Like most kids in Derry, he believes that the town is not right and that there is something evil lurking in the depths of the town.

He meets Bill Denbrough by a sewer grate in 1985 and has a conversation with him. He also allows Bill to ride his skateboard. Bill tells the kid to be careful and he replies by saying "You can't be careful on a skateboard."

He is seen again towards the end after the big storm which destroys most of Derry and agrees with Bill that the evil in Derry is over. He is unnamed in the book.

He reappears in the 2019 sequel IT: Chapter Two. This time he is named and is shown more. Dean has a total of 3 scenes in the movie. Here, Luke Roessler portrays him as a normal boy who has messy curly hair.

He first appears at Jade of The Orient when he approaches Richie Tozier and quotes Richie’s line “the fun’s just beginning”. Dean then grins at Richie, who believes that the quote was a threat, making him believe Dean is It (Pennywise) and causing him to make a scene in front of everyone. Dean confirms that he is a fan and reminds Richie that the line comes from his act. Embarrassed and apologetic, Richie points towards his parents asking "Are those your parents?" To which Dean replies by saying yes. Richie Tries to enlighten the mood by asking if Dean wants his picture taken with Richie, to which Dean says "I think I'm good" before being ushered away with his parents, who glare at Richie in disgust. Richie then admits to the others that he forgot the line Dean quoted, as he does not write his own jokes.

He is seen a second time living in Bill’s childhood house. As Bill bikes past the drive way, Dean is seen on his skateboard getting ready to ride.

When Bill looks into the storm drain his brother Georgie died at and is almost dragged in by It, Bill escapes, the drain and starts yelling at it.

Dean then sees Bill and asks who he is talking to. Bill then grabs Dean by his blue jacket and drags him away from the drain. Bill then tells Dean to stay away from that drain if he hears voices emitting from it. Dean then is confused and questions Bill. Bill soon gets on his bike but, before he bikes away, Dean tells Bill, that he's been hearing voices of a clown and children when he’s in the bathtub. Bill immediately grabs Dean by his jacket and starts screaming into his face, shaking him and yelling at him to be careful around drains and to get out of Derry as soon as he can. Bill goes as far as to tell him to lie to his parents and make him never

come back. Dean sees this a threat and takes it the wrong way. Dean tells Bill that he has to go to the carnival and rides away on his skateboard, intimidated and freaked out.

When Bill is talking to Beverly in the hotel, Bill spots Dean's skateboard going down the stairs. He turns it around and the deck of the board implies that Pennywise is going after Dean. Pennywise uses this as a taunt and Bill immediately goes after the boy.

Bill quickly rushes to the carnival. He looks around and spots Dean going into the mirror maze. In the mirror maze, Bill repeatedly bumps in to mirrors as a result of failed attempts to get towards Dean. Bill manages to see Dean walk by, but he is stopped by glass panels, resulting in him losing Dean right away.

Bill finally clearly sees Dean. Bill sprints towards him but, is stopped by a glass panel. Dean looks at Bill in confusion. Bill greets him to which Dean shoots back at him with a somewhat angry tone. Dean is freaked out by the fact that a man who was screaming into his face just before is now "stalking" him. Both Dean and Bill then hear squeaking sound on a glass panel. Dean turns around and is shocked as he looks at Pennywise who is licking the glass.

After Pennywise finishes licking the glass, he starts head butting the glass panel. This shocks Dean and he screams in fear. Bill desperately tries to break the glass but, the glass doesn't break or even crack. Eventually Pennywise starts banging even faster as Dean starts to panic more. Pennywise eventually stops and smiles at Dean with his sharp teeth. Bill is breathless and Dean is breathing heavily in a state of shock. Pennywise then leans his head back, preparing another head bash and this shatters the glass, Pennywise charges at Dean, grabbing the young boy as blood splatters everywhere. It is safe to assume that Pennywise also chomped his head resulting in blood spraying out as well.

Dean's death also seems to be the key of Bill facing IT, only to be joined by his friends in which they avenge him and the rest of the people killed by IT.

Dean seems to be very calm. This is shown when Bill shakes him loads of times while screaming into his face, Dean still remains calm but annoyed. When Richie yelled at him he didn't yell back or anything but, instead he confirmed he is a fan.

Dean also seems to not be very emotional. This could mean, that he is able to tolerate fear better than most kids. This could be the reason why he is so calm, even when he's been hearing voices in his bathtub. Dean also seems to be somewhat cynical, merely shrugging off the voices he hears in the shower as if he doesn’t think it’s real. However when Dean is attacked by Pennywise, he did become scared as his thoughts had betrayed him and because of his cynical behaviour, it caused him to be vulnerable.

Dean is also patient, not wanting to retaliate after literally being screamed at by Bill and Richie. He also seems to be street smart by, not trying to fight in public.

Dean is freaked out by the fact that Bill, a stranger who was screaming at him and shaking his body at the same time, only a few minutes ago is now stalking him.  It is possible that Dean has a strained relationship with Bill. It is likely as, Dean shows animosity towards Bill in the mirror maze, yelling lines like:

"What are you doing here!" And "STOP FOLLOWING ME!"

When Pennywise's presence is near by, Dean is forced to side with Bill. Although having an aloof behaviour towards him, he still accepts Bill's help. Bill even goes so far as to bargain with Pennywise, and tries to help Dean. When Dean is devoured, Bill screamed "NO!" and is shocked and saddened of the death.

Dean's death also gives Bill the courage and fuel to face IT with his friends. This shows that Pennywise has done enough damage already by, killing his brother and Dean in front of him, showing that Bill did indeed care for Dean.

Dean is a fan of Richie, and when the latter starts screaming into his face, his fan facade starts to fade-away. Richie does try to make it up to Dean, by asking if he wants a picture. Dean who is already freaked out and mad, shrugs it off and says "I think I'm good" before going with his parents.

―Dean to Bill before his death

"What are you doing here?" 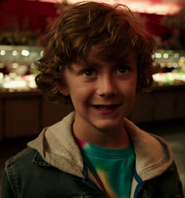 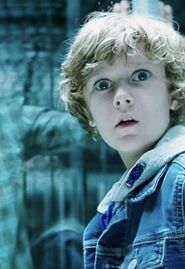 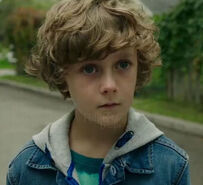 Dean being pulled away from the drain by Bill.

Pennywise destroying the glass to get to Dean 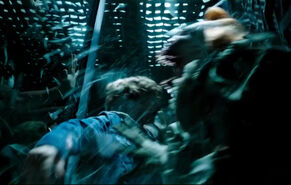 Pennywise breaks through and attacks Dean. 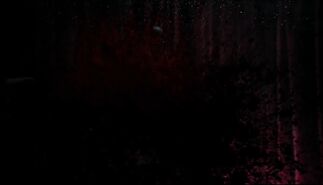 Dean’s blood gets splattered across the glass panel.
Community content is available under CC-BY-SA unless otherwise noted.
Advertisement