Daniel Anthony "Danny" Torrance is the son of Jack and Wendy Torrance, the older half-brother of Lucy Stone and the uncle of Abra Stone. He is the cousin of Jackie Torrance.

He has the "shining", which allows him to detect spirits, thus making him a prime target of the Overlook Hotel. His ability also allows him to see past, present, and future events through his 'guide', Tony. Tony is, at first, a mere imaginary playmate. Tony then evolves into a source of fear, and finally a source of strength.

In the book, Danny appears to be a lonely, curious yet nervous boy who loves both his parents but has a particular love towards his father. Danny has terrifying visions of The Overlook Hotel which worry and disturb him. He arrives with Wendy and Jack at The Overlook Hotel on Closing Day, where he finds the hotel is extremely busy with guests checking out and staff assisting guests leave as well as leaving themselves. Danny meets the chef Dick Hallorann, who gives Danny and his parents a tour of the kitchen. Dick telepathically talks to Danny, revealing he has the shining as well. Before leaving, Dick warns Danny to not enter Room 217 and to call him if he needs him. When Stuart Ullman gives Danny and his parents a tour of the hotel and upon entering The Presidential Suite sees brain matter and blood on the walls. Danny and his parents watch Bill Watson and Ullman leave and they are alone. A month passes and Danny has no frightening visions until one night where he goes into a trance. Danny starts exploring the empty hotel, going down the hotel’s empty corridors. Out of curiosity, Danny finally enters Room 217 and is strangled by Lorraine Massey. A frightened Wendy accuses Jack of abusing Danny once again, but Jack hotly denies the allegations. Danny soon tells his parents about Lorraine and his shining. After more terrifying events, Danny realises that Jack is going to severely hurt Wendy and himself and calls Dick for help. Danny witnesses Jack physically abuse Wendy and helps Wendy lock Jack in the pantry. Toward the end of the novel, Tony reveals himself to Danny: "'Danny ... you're in a place deep down in your own mind. The place where I am. I'm a part of you, Danny.'" More specifically, Tony is Danny from the future: "Tony was like looking into a magic mirror and seeing himself in ten years"; "Tony ... the Daniel Anthony Torrance that would someday be." Danny soon realises the hotel boiler wasn’t dumped and is going to blow. Danny, Wendy and Dick escape The Overlook just in time as the boiler explodes, destroying The Overlook completely and killing Jack. In Autumn, Dick has booked Danny and Wendy a lakeside cabin until they can find a place. Danny has severe PTSD and misses his father but finds a father figure in Dick.

Later as a adult, Danny (now Dan) works as an orderly at a hospice, who uses his abilities to help dying people find peace after they died, learns that his father had an affair with his teaching assistant, Sandy Reynolds and as a result has a half-sister named Lucy and a niece named Abra, who shares his abilities, but on a much more powerful level.

In the movie adaptation, Danny is notably quieter than his book counterpart. He is first seen eating a sandwich with Wendy and asks her if she wants to go to the Overlook, to which Wendy replies she does. After Danny has a terrifying vision, a nurse visits but assures Wendy she has nothing to worry about. On Closing Day, Danny sees the Grady Twins in the games room. He is later brought to The Gold Ballroom by Ullman’s secretary Susie, who found him outside looking for his parents. Danny and Wendy take a tour with Dick of the Overlook kitchen. Dick telepathically asks Danny for ice cream. He tells Danny of the "shining ability" he had with his own grandmother, and says that the hotel can "shine" is its own way. When Danny says that Mr. Halloran has a fear of Room 237. Halloran denies this, but sternly instructs Danny that he has no business in there to begin with and to stay away from it. A month passes and Danny rides around the empty Overlook Hotel on his tricycle. He also explores the empty hotel with Wendy, particularly the hedge maze. He eventually encounters the Grady Twins in an empty hallway and has a terrifying vision of their murder. Danny’s curiosity soon gets the better of him and he enters Room 237, where he is strangled by the ghost of Lorraine Massey. He meets Wendy in The Colorado Lounge, who notices his bruises. Wendy accuses Jack but soon finds out the truth. Jack soon goes mad and Danny leads Jack into the hedge maze, where he tricks Jack and misleads him. Danny and Wendy escape the Overlook and Jack freezes to death in the hedge maze.

Danny and Wendy move into an apartment in Florida but the ghosts of the Overlook taunt Danny. Danny talks to the ghost of Dick who teaches Danny to lock the ghosts in a mental lockbox in the Overlook hedge maze. In 2011, Danny is an alcoholic, fighting men in pubs and bars and sleeping in the streets. He steals food stamps from a drug addicted woman named Deenie after sleeping with her, but later has a vision of the rotting ghosts of her and her infant son, discovering that she overdosed after her abusive boyfriend killed her baby. In 2019, he decides he needs help and starts attending AA meetings. He also gets a job at a hospice, aiding dying people. He later meets Abra Stone, who shares The Shining, only stronger. Both he and Abra kill most of the members of The True Knot and meet Rose the Hat at the Overlook, which was abandoned and left to rot and kill her. He later sacrifices himself to let Abra Stone live and dies as the Overlook Hotel boiler blows up, destroying the Overlook completely and killing Danny. His ghost later talks to Abra and he apologises if he scared her. 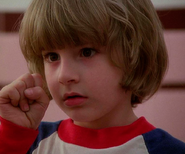 Add a photo to this gallery
Retrieved from "https://stephenking.fandom.com/wiki/Danny_Torrance?oldid=77615"
Community content is available under CC-BY-SA unless otherwise noted.