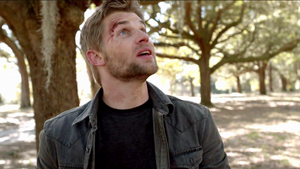 Dale "Barbie" Barbara is the older brother of Wendell Barbara. He served as a Captain in the Iraq War, and later worked as a short-order cook at Sweetbriar Rose in Chester's Mill, Maine.

On October 20, he was beaten in the parking lot of Dipper's Roadhouse by a gang led by Junior Rennie. The next day, he decided to leave Chester's Mill, but was stopped by the newly-materialized Dome, witnessing the plane-crash that killed Chuck Thompson and Claudette Sanders, and the log-truck crash that occurred soon after. He met Paul Gendron on Route 119 following the crashes, and the two set out west along the wall to look for an end to the barrier before Jim Rennie arrived on the scene.

Dale and Gendron later came upon another crash at Route 117, finding Billy and Wanda Debec and Nora Robichaud dead and Elsa olicugyvtvjhyta alive. While Gendron tried to help Andrews, the three witnessed the explosion of a CBS-13 helicopter that collided with the Dome. Not longer after, Gendron parted ways with Dale, who asked that Gendron get in contact with Colonel James Cox at the Fort Benning Army Base. Gendron agreed, and Dale continued west, meeting another man who had been following the wall from another direction, and the two surmised that Chester's Mill had been cut off from the world.

At that point, Barbara hiked back into downtown Chester's Mill, returning to Sweetbriar Rose to find the diner packed with Anson Wheeler working the stoves. He quickly took back control of the kitchen to Rose Twitchell's great relief, and helped serve patrons until an hour after closing. Before leaving for the evening, he discussed the building's generator and propane supply with Rose, and advised her to stop at Food City the next morning to stock up on meats. After closing up the diner, he headed back to his apartment above the Sanders Hometown Drugstore.

Later that night, he was visited by Julia Shumway, who had received a call from Colonel Cox. The two headed out to the barrier where it cut across Little Bitch Road, and after being largely ignored by a squad of Marines there, Dale returned Cox's call. The Colonel explained what the Army had learned about the Dome so far, including the hypothesis that the barrier was powered by a generator of some kind within Chester's Mill. Cox then requested that Barbara employ his skills as a military tracker to find the generator and disable it; Dale reluctantly agreed.

Shumway and Barbara watched the President's speech at midnight before Barbara returned to his apartment above Hometown Drug. On the morning of the 22nd, Shumway introduced Dale to Brenda Perkins, widow of Police Chief Howard Perkins, who still had her husband's keyring, including keys to the Town Hall where a Geiger counter was stored in a bomb shelter. Barbara was also informed by Cox that the United States Army planned a tactical missile strike for that afternoon, and Barbara helped Shumway and Joe McClatchey set up a live video feed for the townspeople to watch from Dipper's, confronting Peter Randolph and Jim Rennie to do so.

The missile strike failed, but Barbara used the fires caused by the explosion as a distraction to sneak into Town Hall – where he met Thurston Marshall, Carolyn Sturges, Alice Appleton, and Aidan Appleton – and take the Geiger counter. He also encountered Rusty Everett in the building, and the two searched the Town Hall supply shed, finding one of Catherine Russell Hospital's missing propane tanks. Barbara then gave the Geiger counter to Everett with instructions for him to give it to Shumway, with instructions to tell her to give it to McClatchey.

Later that night he and Shumway (as well as Lissa Jamieson) met Cox at the Dome to witness a failed attempt to cut through the barrier with an experimental acid, HY-908. Barbara returned to his apartment to find that someone had searched his rooms, surmising that he would soon be set up by Jim Rennie. On the 23rd, Barbara helped Rose to diffuse the Food City riot, then headed to the Hospital with Rusty to help patch up those injured at the store. At the Hospital, Barbara was wrongly arrested by Randolph for the murders of Angie McCain, Dodee Sanders, Lester Coggins, and Brenda Perkins. Before he was taken by the police, he showed Rusty that he was unbruised.

Barbara was booked at the Police Department building, where he was beaten by Melvin Searles and maced by Randolph when he pleaded with Linda Everett to ensure that Rusty performed autopsies on the bodies of McCain, Sanders, Coggins and Perkins. Dale was later confronted by Andy Sanders, who nearly acquired Randolph's gun in order to kill Barbara, and Rennie, who claimed that if the Dome did not lift, the Board of Selectmen would try Barbara themselves and execute him.

In the 2013 miniseries, Barbara will be played by Mike Vogel.

"Pilot"
"Into the Fire"
"Manhunt"
"Outbreak"

Retrieved from "https://stephenking.fandom.com/wiki/Dale_Barbara?oldid=14879"
Community content is available under CC-BY-SA unless otherwise noted.