Cycle of the Werewolf is the 18th book published by Stephen King; it was his 15th novel, and the eleventh novel under his own name. The book was released by Land of Enchantment in November of 1983, and illustrated by Bernie Wrightson. Cycle of the Werewolf and The Colorado Kid are the only two Stephen King novels to only be published in paperback once. The story is set in the small town of Tarker's Mill, Maine. This story is about a werewolf who viciously killing people and animals, and a strange incident takes place at each full moon. The first victim happened in January of a railway man. The otherwise normal town is living in fear after January. Introduced in March, the hero of the story is Marty Coslaw, an eleven-year-old boy in a wheelchair who given more development in July. The story goes back and forth from the terrifying incidents to Marty's youthful day-to-day life and how the horror affects him after July to discover the human identity of the werewolf.

In a snow storm nine miles out of Tarker's Mill, Maine, Arnie Westrum, the flagman on the GS & WM Railroad, is caught in a shack. He plays Last Man Out solitaire. At first, he thinks he hears the wind until he realizes that the door is been scratch. He infers to be dog that wants to come in and thinks about what to decide about his visitor. Before he can decide, he hears that the whining rises to a snarl. He draws back after whatever is outside hits the door heavily. When he notices the door been crack he tries to find something to support the part of the door. After noticing that his visitor is a big wolf, he picks up a pick. He swings the pick at werewolf but eventually he fails and is torn apart. He becomes the werewolf's first victim.

In St. Valentine's Day full moon, Stella Randolph thinks about love lying in her narrow bed. It is revealed that she sent herself twenty Valentines from famous celebrities which she has done every year. She also thinks about the people laugh at her especially the small boys. Her thoughts are interrupted until she hears a scratching at the window. She notices a dark shape that is clearly masculine blocking the moonlight in the window. She walks toward the window thinking love has come until she put her finger on the sash of the window notices that it is not a man. She deceives herself that it is a man that is wickedly handsome. She throws the window up and takes a step backward until the wolf leaps inside. She realizes too late that it is the same werewolf that killed Arnie Westrum last month. She collapses as she walk back in her bed as werewolf puts its paw up on the bed, one on either side of her. She is able to smell its breath until she whispers Lover and closes her eyes. The werewolf falls upon her killing her.

Milt Sturmfuller tells his wife over coffee, "Mother Nature's pruning out her deadwood". It revealed that he has kept his wife in bondage of terror for twelve years. After his wife, Donna Lee Sturmfuller spills her coffee, he orders her to clean it up. And when she barks her shin on a footstool and cries out, he laughs heartily at her since he enjoys watching his wife in pain.

Lester Lowe: He is the reverend of the Grace Baptist Church in Tarker's Mill. He was discovered to be the werewolf by only Marty Coslaw during Halloween because of the eye-patch he wore after the incident during the fourth of July.

Marty Coslaw: He is a handicapped boy who survives the encounter with the werewolf by throwing his fireworks in the werewolf's eye during the Fourth of July.

Constable Neary: He is the town's constable and friend of Alfie Knopfler. He has a wife named Joan who he lives in a apartment with. He is big and beefy. He used to play football in high school with average grades in his classwork. He hears the howl of the werewolf, despite the fact he doesn't believe in the existence of werewolves, in March while standing at the bedroom window.

Milt Sturmfuller: He is the town librarian. He is married to Donna Lee Sturmfuller, whom he hit somebody hard many times and mistreats. He has an affair with Rita Tennison who gave him herpes, that he later passed to his wife. He is killed by Lowe who takes Milt's head off with a swipe with Milt's eyes wide, when Milt thought he got himself away from Taker's Mill with Rita from the werewolf.

Billy Robertson: He is the bartender and proprietor of The Pub, the only saloon of Tarker's Mill, Maine.

Donna Lee Sturmfuller: She is the wife of Milt Sturmfuller. She never had cheated on Milt during twelve years of marriage and became infected by herpes through Milt. She moved out of town after the death of Milt Strumfuller.

Herman Coslaw: He is the phys ed teacher at the Tarker's Mills grammar school. He is the father of Marty Coslaw.

Kate Coslaw: She is the big sister of Marty Coslaw. She believes that Marty always gets what he wants because he is cripple.

Uncle Al: He is the uncle of Marty Coslaw. His sister is the mother of Marty, who became furious with him for giving Marty the fireworks in the fourth of July. He fought in Viet Nam and won a won a couple of medals there.

The audiobook version of Cycle of the Werewolf is read by Nick Sullivan. 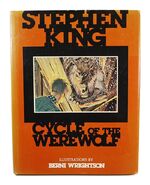