Cujo is the 1983 adaptation of Cujo directed by Lewis Teague from a screenplay by Don Carlos Dunaway and Lauren Currier. It was released on August 12, 1983.

Donna Trenton (Dee Wallace) is a frustrated housewife whose life is in turmoil after her husband Vic learns about her having an affair. Brett Camber is a young boy and a son of a mechanic, Joe, whose only companion is a St. Bernard named "Cujo." Cujo is bitten by a bat with rabies and his behavior begins to change. While the dog begins to succumb to the disease, Brett and his mother leave for Connecticut to visit his mother's sister. When Donna and her young son, Tad, drive out to the home where Cujo and the Cambers live, the gentle Cujo has been driven insane by rabies and has killed Joe and the Cambers' neighbor. Making matters worse, their car battery dies at the Cambers' house. Donna and Ted are trapped inside while the massive dog waits outside, attacking repeatedly, all while Vic is out of town on a business trip.

Cujo brutally kills anyone and everyone who comes to the house, including the local Sheriff. Eventually Donna makes an attempt to dash for the house but is attacked by Cujo, the only safety being the car. After a brutal struggle between the desperate mother and the relentless animal, Donna takes advantage of a momentary distraction and beats Cujo with a baseball bat and then stabs him with the handle when the bat breaks. After Donna manages to revive her son, who had passed out due to the extreme heat, Cujo tears through the kitchen window and launches himself at the two. Donna kills Cujo with the dead Sheriff's revolver. She is joined by her husband outside who has just arrived as the carnage ends.

For the character of Cujo the film used five St. Bernards, a Rottweiller, one mechanical head, and a man in a dog costume.

An uncredited Frank Welker provided some of Cujo's vocal effects during the attack scenes.

The film recieved mixed reviews upon its release. Most critics said that the film was a cliche` and jump-scare ridden mess. However, since then, it has gained a gentle reception from fans, who call it a very good adaptation of the novel, praising the cast, how it follows the book so closely, and Cujo himself. The film was #58 on Bravo's 100 Scariest Movie Moments.

Differences from the Book 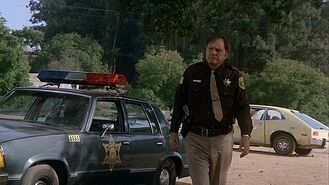 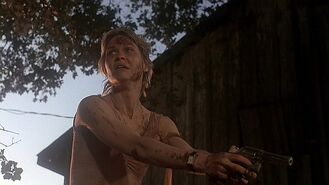 Add a photo to this gallery
Retrieved from "https://stephenking.fandom.com/wiki/Cujo_(film)?oldid=79188"
Community content is available under CC-BY-SA unless otherwise noted.