watch 03:27
Wiki Targeted (Entertainment)
Do you like this video?
Play Sound
Article Stub
This article is a stub, an article too short to provide more than rudimentary information about a subject. Please help the Stephen King Wiki by expanding it.

Christopher Phillip Unwin, known as Kristoff Darwin is one of the homophobic bullies who attacked Adrian Mellon and Don Hagarty in the novel, It.

Unlike his other two friends, John "Webby" Garton and Steven Dubay, who tend to be very unethical and immoral, Chris seems to have a more innocent personality, realizing his mistakes and crimes. He is also among the youngest out of the three, being only fifteen years old. Despite his defined morals, he still participated in the violent assault of Adrian Mellon, a discriminated act of crime against homosexuality. Chris, along with Garton and Dubay, eventually tossed Adrian over the canal bridge, where he falls to his "supposed death".

While being questioned by detective Andrew Rademacher, Chris claimed that he witnessed a clown under the bridge, biting into Adrian's armpit and dragging him away. He also notes the clown's sneer. Despite his claim of seeing a murderous clown under the bridge, there was no mention of a clown during the trial. Unwin was found guilty of second-degree murder and sentenced to six months in prison at South Windham Boys' Training Facility.

Chris Unwin appears in IT: Chaper Two. Chris insults Adrian and Don as they leave the Canal Days Festival, and later assists Webby, Steven, and another unnamed bully in brutally beating them. Chris runs off as a train passes on the nearby railway bridge. 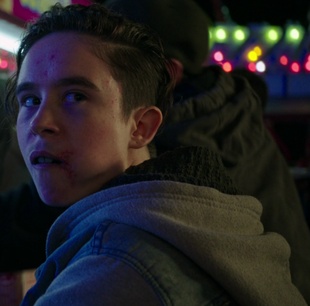 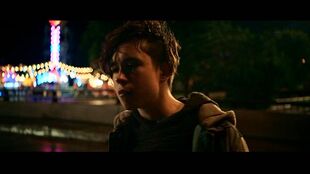 Add a photo to this gallery
Retrieved from "https://stephenking.fandom.com/wiki/Christopher_Unwin?oldid=82323"
Community content is available under CC-BY-SA unless otherwise noted.